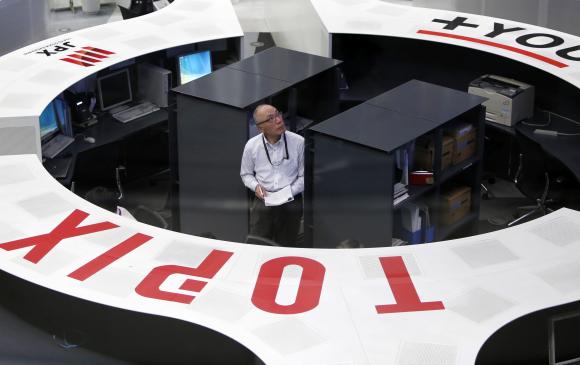 TOKYO - Asian stocks stalled on Friday as Federal Reserve-inspired gains petered out, while the dollar steadied after rebounding from the shock of a surprisingly dovish US central bank. MSCI's broadest index of Asia-Pacific shares outside Japan .MIAPJ0000PUS edged down 0.1 percent after rallying 1.3 percent the previous day. But it still looked set for a gain of around 2.4 percent for the week. Spreadbetters called for a slightly higher open for Britain's FTSE .FTSE, Germany's DAX.GDAXI and France's CAC .FCHI. US  S&P futures ESc1 also pointed to small gains on Wall Street later in the day. The region's decliners included shares in Hong Kong, Malaysia, South Korea and Thailand. Australian and Chinese stocks were among the gainers in a choppy session. Japan's Nikkei .N225 swerved in and out of the red and was last up 0.1 percent, taking a breather after a strong rally since February that took it to a 15-year high. "There are some signs the rally had got overheated. So the market is in a correction phase," said Masahiro Ayukai, senior investment strategist at Mitsubishi UFJ Morgan Stanley Securities in Tokyo. US shares fell overnight as the dollar's rebound dragged down oil and other commodity prices, sending energy and material sectors lower. [.N] "Crude oil is falling again and if US equities remain unstable amid differing prospects for a Fed rate hike, it will weigh on global equities," said Junichi Ishikawa, market analyst at IG Securities in Tokyo. The dollar tumbled across the board, risky assets surged and US  debt yields sank after the Fed on Wednesday opened the door further for an interest rate hike but signaled a more cautious outlook for US . growth, cooling speculation for tightening in June. The dollar was little changed at 120.725 yen JPY= after sinking to the week's low of 119.29 after the Fed's statement. Helping the greenback was higher US  Treasury yields, which on Thursday bounced modestly from multi-week lows hit on the Fed's dovish-sounding statement. The 10-year Treasury note yielded 1.958 percent US10YT=RR after sinking to a five-week trough of 1.899 percent overnight. The euro edged up 0.2 percent to $1.0684 EUR=. The common currency had posted its biggest one-day gain in six years against the dollar and climbed a peak of $1.1062 after the Fed. Greece promised on Friday to speed up implementation of its extended bailout agreement and send a full list of detailed reform proposals to its euro zone partners in the coming days, German Chancellor Angela Merkel said. However, she declined to set any date for releasing any further aid to the Greek government, which is rapidly running out of cash. The dollar index was down 0.4 percent at 98.902 .DXY but still well above a low of 96.628 plumbed midweek. The index was on track for a 0.1 percent loss on the week after touching a 12-year high above 100.00 on March 13. In commodities, US crude oil was down 0.4 percent at $43.77 a barrel CLc1 after taking a knock overnight on the dollar's bounce and Kuwait's stance that OPEC had no option but to keep producing in an oversupplied market. [O/R] US crude has dropped to a six-year low of $42.03 a barrel earlier in the week. -Reuters