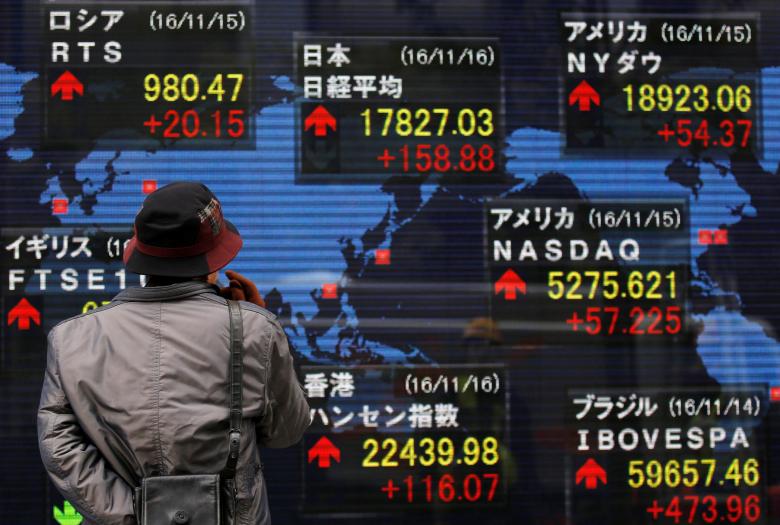 TOKYO - The dollar stood near a 14-year peak, bond yields were highly elevated and Asian stocks struggled for traction on Friday as global markets continued adjusting to the idea of higher US interest rates. In a move that reverberated across the financial markets, the Fed on Wednesday raised rates for the first time in a year and projected three more increases in 2017, up from the two projected in September. The dollar index against other major currencies last stood at 103.10 .DXY after storming to 103.56 overnight, its highest since December 2002. The euro was steady at $1.0427 after hitting $1.0366 overnight, its lowest since January 2003. The dollar was little changed at 118.250 yen after surging to a 10-month high of 118.660 the previous day. The prospect of the Fed tightening monetary policy next year faster than earlier expected drove the benchmark U.S. Treasury 10-year yield US10YT=RR to highs unseen in two years. "World markets continue to adjust to an outlook for higher US interest rates and increased inflation risk boosted by major US tax cuts," wrote Ric Spooner, chief market analyst at CMC Markets. Tracking the rise in the US 10-year note's yield, Japan's 10-year government bond yield brushed an 11-month peak of 0.10 percent JP10YTN=JBTC. That gain is expected to test the Bank of Japan's resolve to keep the yield around zero percent. Asian stocks were tepid, reflecting the differing fortunes for developed and emerging market economies faced with higher US interest rates. "Emerging market countries have been hit the hardest by capital leaving in search of higher yields and return along with the growing cost of paying back dollar denominated debt," wrote Kathy Lien, managing director of FX strategy at BK Asset Management. MSCI's broadest index of Asia-Pacific shares outside Japan .MIAPJ0000PUS crawled up 0.1 percent after falling 1.8 percent on Thursday. The broader emerging market stock index .MSCIEF was down 1.6 percent. Shanghai gained 0.1 percent after losing 0.7 percent the previous day, while Malaysian and Indonesian shares were a touch lower. South Korea's Kospi added 0.3 percent. Japan's Nikkei climbed 0.7 percent, reaching a one-year high on a weaker yen and gains on Wall Street overnight. US shares rose on Thursday, brushing off the initial shock of a more hawkish Fed, led by shares of banks seen as beneficiaries of higher rates. European stocks also gained on higher bank stocks, adding 1 percent on Thursday. Emerging market currencies, hit after last month's US election win by Donald Trump raised the spectre of higher US rates, suffered a fresh blow from the Fed's latest move. China on Friday set the yuan's midpoint at its weakest since 2008. Brazil's real BRBY fell as much as 2 percent overnight while the Indonesian rupiah and South Korean won saw their worst losses since Trump's win. However, the Mexican peso strengthened after the country's central bank on Thursday countered the Fed's tightening with an aggressive rate hike. In commodities, crude oil prices nudged higher as expectations that Kuwait would cut supplies by a larger than expected amount as part of a coordinated effort by oil producers to cut output offset negative pressures from a bullish dollar. Brent crude LCOc1 gained 0.5 percent to $54.27 a barrel. Precious metals did not fare as well against a stronger dollar. Spot gold XAU= and platinum XPT= hit 10-1/2-month lows of $1,122.35 and $885 an ounce overnight while silver XAG= dropped to its lowest since June. Copper CMCU3 was down 0.1 percent at $5,729 a tonne. It had surged to a 17-month peak above $6,000 in November on speculation that a Donald Trump presidency would usher in fiscal stimulus and boost demand for metals. -Reuters