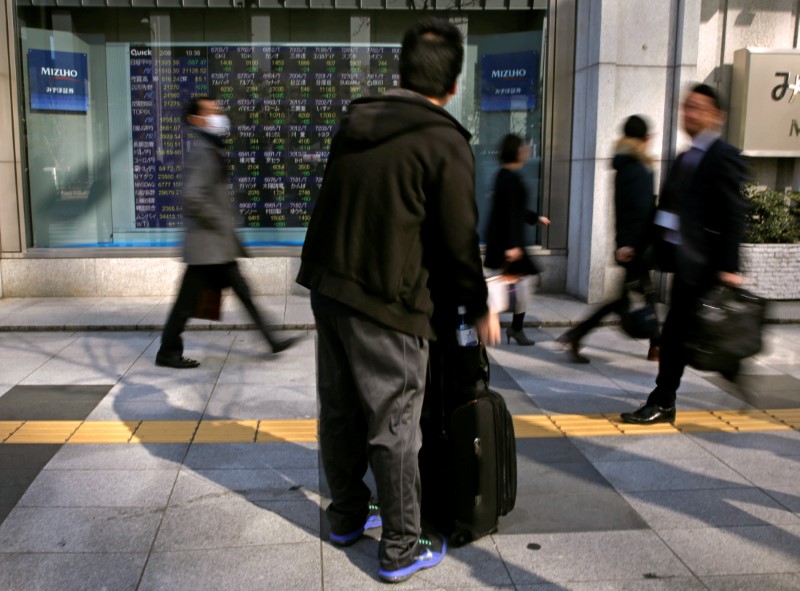 TOKYO (Reuters) - Asian stocks were higher on Wednesday, supported by strong Wall Street earnings and hopes China’s government spending would boost growth but trade tensions remain in focus ahead of a meeting between the US and European Commission presidents. MSCI’s broadest index of Asia-Pacific shares outside Japan .MIAPJ0000PUS gained 0.2 percent. The index extended the previous day’s gains made after China said it will adopt a more vigorous fiscal policy to cushion the impact of external uncertainties. The Shanghai Composite Index  was little changed after brushing a one-month high. It has advanced roughly 3 percent so far this week. Hong Kong's Hang Seng climbed 0.6 percent. South Korea's KOSPI lost 0.15 percent and Japan's Nikkei rose 0.5 percent. Overnight on Wall Street, the S&P 500 closed at its highest level since Feb. 1 as Alphabet's  blowout results bolstered expectations of a robust earnings season. “Gains by US shares are providing support for equities, as well as China’s stimulus plan. Corporate earnings will continue to come out and these will be a key focal point for the markets, which also have to keep an eye on trade developments,” said Soichiro Monji, senior economist at Daiwa SB Investments in Tokyo. On the trade front, focus was on talks between US President Donald Trump and European Commission President Jean-Claude Juncker set later on Wednesday, at which trade issues are likely to dominate. In foreign exchange markets, the dollar index against a basket of six major currencies .DXY was little changed at 94.568, having edged up from a near two-week low of 94.207. The 10-year Treasury note yield US10YT=RR stood at 2.943 percent after climbing to a six-week peak of 2.973 percent overnight. The yield shot up this week on speculation the Bank of Japan was edging closer to unwinding its aggressive monetary stimulus, following reports late last week that the central bank was holding preliminary discussions on possible changes to its monetary policy. The euro edged up 0.05 percent to $1.1688 while the dollar added 0.05 percent to 111.26 yen . The pound was up 0.05 percent at $1.3151 , building on gains from the previous day on news that British Prime Minister Theresa May would lead negotiations on the country's departure from the European Union. The decline in China's yuan's appears to have paused for the time being, with the currency a shade firmer at 6.797 per dollar . It pulled back from a 13-month low of 6.829 set the previous day on expectations that monetary conditions would be allowed to loosen further. The Australian dollar dipped 0.1 percent to $0.7411 after gaining 0.5 percent when hopes for China's stimulus lifted the currency. The Turkish lira  was on the defensive after the country's central bank unexpectedly left interest rates on hold. The central bank’s decision was in focus amid investors’ concern over its perceived lack of independence from Turkish President Tayyip Erdogan. The president is seen wanting lower borrowing costs to fuel economic growth, although the central bank is tasked with combating inflationary pressure. The South African rand ,on the other hand, stood tall after surging more than 1 percent on news that China would invest $14.7 billion in the local economy. Copper on the London Metal Exchange (LME) traded at $6,270.50 per tonne CMCU3 after soaring 2.7 percent overnight to a two-week peak of $6,328.00. Iron ore on the Dalian Commodity Exchange DCIOcv1 touched a two-month peak of 479.5 yuan a tonne. Brent crude futures LCOc1 were up 0.67 percent at $73.92 a barrel, adding to the previous day’s gains as market focus shifted away from oversupply concerns to the possibility of increasing Chinese demand.