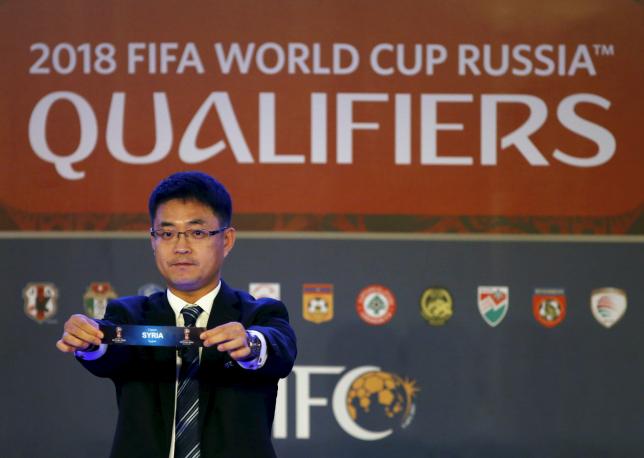 KUALA LUMPUR - The sheer enormity and rich diversity of Asia offers a bitter-sweet opportunity to the region's World Cup hopefuls. After a revamp of the qualifying procedure, Asia's heavyweight teams now get the benefit of playing against some of the world's weakest national sides, but the road to qualifying can be a tricky and sometimes hazardous adventure. Inevitably, teams are forced to undergo long-haul trips to far flung parts of the world's most populated region, while some teams have to play their home matches in neighbouring countries because their homelands are ravaged by conflict and political unease. So when the World Cup draw is made, players and officials from all teams all collectively hold their breath, hoping for the easiest path possible to soccer's greatest extravaganza. On Tuesday, at a plush hotel in the Malaysian capital, the draw was made for the second round of Asian Cup qualifiers for the 2018 World Cup in Russia throwing up a fascinating mixture of match-ups. The top eight teams were separated into eight separate pools, each with five teams. The reigning Asian champions Australia drew Jordan, Tajikistan, Kyrgyzstan and Bangladesh in Group B. "The draw is certainly an interesting one and throws up some games against unfamiliar countries," the Australian head coach Ange Postecoglou told reporters. "We will face some logistical and footballing challenges, but we'll continue to work hard to make sure we are ready for whatever challenges we face." South Korea, runners-up at this year's Asian Cup, were pitted against Lebanon, Myanmar, Kuwait and Laos in Group G. "If our players can play the way they have recently, I think we should be able to get through the second stage with a good record," coach Uli Stielike was quoted as saying by Yonhap news. Regional heavyweights Japan were drawn in Group E with Syria, Afghanistan, Singapore and Cambodia, while Iran, Asia's top-ranked country, ended up in Group D with India, Oman, Turkmenistan and Guam. Iraq were drawn in Group F with Vietnam, Thailand, Indonesia, Taiwan, while Uzbekistan were placed alongside North Korea, Yemen, Bahrain and Philippines in Group H. The remote Himalayan kingdom of Bhutan, which started the first round of qualifiers as the world's worst team, according to FIFA rankings, was chosen in Group C with China, Hong Kong, Maldives and Qatar, the 2022 World Cup hosts. Saudi Arabia ended up in Group A with Palestine, East Timor, Malaysia and United Arab Emirates, the host of the next Asian Cup, in 2019. The second round of matches, which start in June and run until March next year, will double as qualifiers for both the World Cup and Asian Cup. Each of the 40 countries will play home and away against the four other sides in their group. The eight group winners and the four best runners-up will advance to the next stage of World Cup qualifying in Asia and also qualify directly for the Asian Cup. The teams that miss out will go into another phase of Asian Cup qualifiers. - Reuters