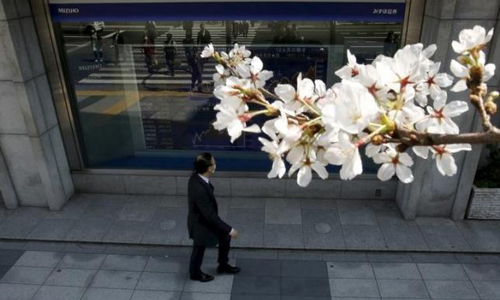 TOKYO - Asian stocks rose across the board on Tuesday after a rally on Wall Street and steps by China to shore up its economy boosted risk appetite, while Greek debt worries again haunted the sagging euro. Tracking overnight gains in U.S. stocks, MSCI's broadest index of Asia-Pacific shares outside Japan .MIAPJ0000PUS was up 0.7 percent. Japan's Nikkei .N225 added 0.3 percent and Australian shares .AXJO rose 1.2 percent. Bourses in South Korea, Malaysia and Indonesia posted sizeable gains as well. The Shanghai Composite Index .SSEC followed up Monday's rally, rising to a fresh seven-year high on hopes for more infrastructure spending and monetary easing. The Dow .DJI and S&P 500 .SPX both climbed more than 1 percent Monday with sentiment buoyed by robust Chinese equities. After unveiling details over the weekend for a modern "Silk Road" that could pump tens of billions of dollars into investment, China late on Monday announced steps to ease housing taxes and lending rules to prop up sliding house prices that have threatened economic growth. "Tax cuts, reductions to down payments on second homes, along with further moves to (reserve) requirement ratios have all been introduced to assist China's slowing housing sector and will be a medium-term positive in the global growth story," Evan Lucas, market strategist at IG in Melbourne, said in a note to clients. China's central bank governor Zhou Xiaochuan's recent warning that China needs to be vigilant for signs of deflation have also helped fuel hopes for more easing. "We believe policymakers are increasingly concerned about weakening growth and inflation, and will deploy more monetary and fiscal easing measures in the coming weeks," economists at HSBC said. In currencies, the euro was down 0.1 percent at $1.0825 EUR=, adding to an overnight loss of 0.5 percent. The common currency fell against the dollar on worries whether Greece can secure aid before it runs out of cash in three weeks. Germany, Greece's biggest creditor, demanded that it show more commitment to reform while Athens said it cannot make an "unconditional" agreement with lenders. The dollar was little changed at 120.16 yen JPY= after surging from an overnight low of 119.105. The Australian dollar found little support from prospects of more stimulus and monetary easing from China, Australia's key trading partner. The Aussie dipped 0.1 percent to $0.7646 AUD=D4 after skidding more than one percent overnight amid persistent expectations of further interest rate cuts by the Reserve Bank of Australia. U.S. crude extended losses as the Mar. 31 deadline loomed for Iran and six world powers negotiating a deal for Tehran's nuclear program. If agreement to end Western sanctions is reached OPEC-member Iran would be able to ship more crude into an already saturated market. [O/R] U.S. crude was down 1.4 percent at $47.99 per barrel. - REUTERS