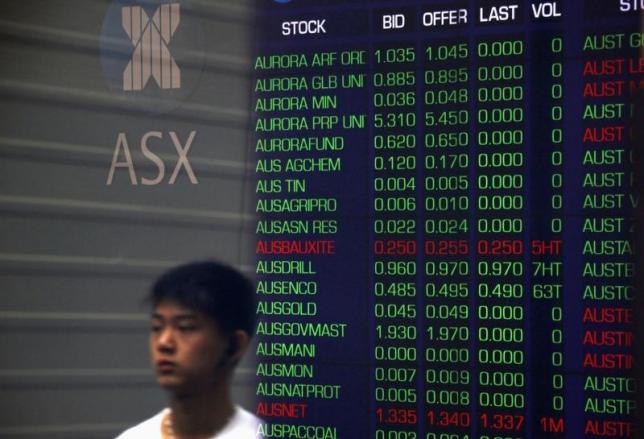 SYDNEY - Asian markets stumbled on Wednesday as relief China had matched its own growth target was soured by poor readings on consumer demand and industrial activity, underlining the need for more policy action by Beijing. Growth in China's colossal economy did slow to a six-year low of 7 percent in the first quarter, but that was better than many feared after a woeful trade performance in March. ECONCN Disappointingly both retail sales and industrial output missed forecasts, with the latter expanding at the slowest pace since the global financial crisis in 2008. "It doesn't change our view that China needs to cut either reserve requirements or interest rates every month during the next three to six months to keep the economy from slowing further," said Qi Yifeng, a macro analyst at CEBM Group in Shanghai. "All other data we see, such as industrial production, exports, power generation etc all look terrible." After an initial foray higher, Shanghai stocks .SSEC took a turn for the worse and fell 1.1 percent. The CSI300 index .CSI300 of the largest listed companies in Shanghai and Shenzhen shed 0.85 percent. Shanghai has been rising for six weeks straight as investors have chosen to focus on the prospect of extra policy stimulus, but looks overdue for some consolidation. MSCI's broadest index of Asia-Pacific shares outside Japan .MIAPJ0000PUS eased 0.5 percent, while Japan's Nikkei .N225 was all but flat. The Australian dollar dipped almost a quarter of a U.S. cent to $0.7600 AUD=D4 as investors fretted about the health of Chinese demand for the country's resource exports. Major currencies were little moved, with the dollar up 0.19 percent against a basket of its peers .DXY. The euro held around $1.0634 EUR= after bouncing on Tuesday following a soft report on U.S. retail sales. Against the yen, the dollar snuck back up to 119.61 JPY= from a an overnight low of 119.07. Wall Street had ended Tuesday mostly higher, helped by energy stocks and quarterly earnings reports that topped modest expectations following worries about a strong dollar. The Dow .DJI rose 0.33 percent and the S&P 500 .SPX 0.16 percent, while the Nasdaq.IXIC fell 0.22 percent. After the bell, Intel Corp (INTC.O) forecast revenue broadly in line with Wall Street's low expectations and signalled a hefty cut in capital expenditure this year, sending its shares up almost 3 percent. Crude oil was firmer after a forecast that U.S. shale oil output would record its first monthly decline in more than four years and on tensions in Yemen. [O/R] U.S. crude CLc1 was up 32 cents at $53.61 a barrel, having risen 3.3 percent on Tuesday, while Brent LCOc1 added 56 cents to $58.99 a barrel. - Reuters