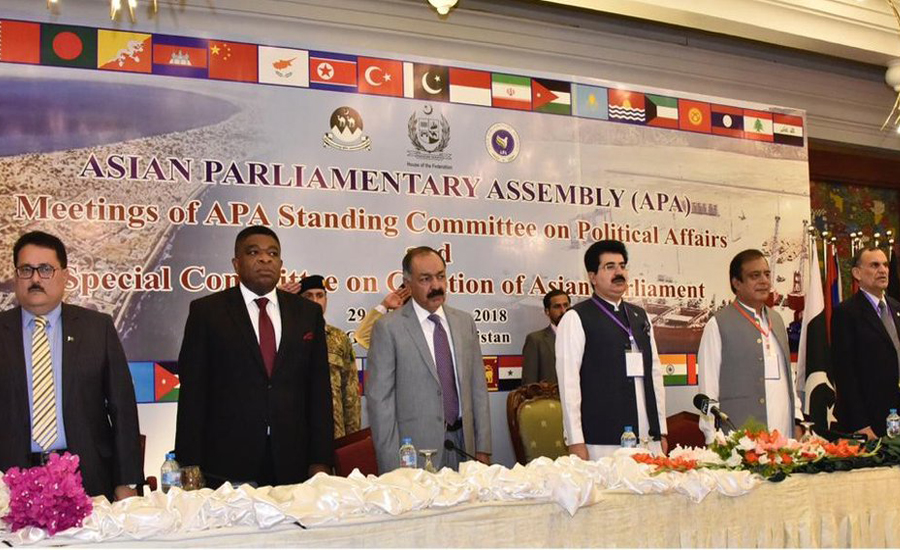 GWADAR (92 News) – A session of the Asian Parliamentary Assembly started in Gwadar on Monday. As many as 50 delegations from different countries have reached Gwadar for the session. Roads have been decorated from Gwadar Airport to the session venue. Flags of the participating countries have been displayed at several places. Asian Parliamentary Assembly Secretary Muhammad Raza Majidi is also participating in the session. Acting President Muhammad Sadiq Sanjrani is presiding over the session. The Acting President was accompanied by Leader of the House in the Senate Senator Shibli Faraz, Senator Kauda Babar, Secretary Senate Amjed Pervez Malik, chief secretary Balochistan Dr Nazir, DGs of Gwadar Development Authority and Gwadar Port Authority, local administration and others. The delegates were amazed to witness the rich cultural dances, games and stalls while they were having a marine drive. They specially praised the friendliness and sociability of the people of Gwadar. IPU head expressed pleasure to see the socio-economic development of Gwadar and cultural features of the region. Delegates from different countries including Turkey, Jordan, Syria, Qatar, Indonesia, Bahrain, China etc have also arrived to participate in this event in the smart city of Gawadar. However, many others would be arriving in due course. Earlier, Senate Secretary Amjed Pervez Malik and Deputy Secretary General of APA DR Khurram Ali exchanged views on arrangements with regard to APA committee meetings. The Senate secretary informed the Deputy Secretary General that arrangements have been finalized and all the departments at federal, provincial, local levels are working in unison to make this conference a success.