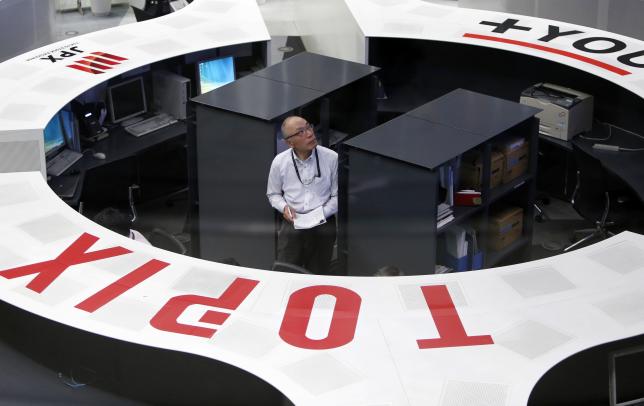 TOKYO - An index of Asian shares edged away from fresh seven-year highs on Friday but was still on track to score weekly gains, while the dollar languished after lackluster US economic data made a near-term interest rate hike appear less likely. MSCI's broadest index of Asia-Pacific shares outside Japan .MIAPJ0000PUS slipped slightly after earlier touching its highest level since January 2008, but was still on track for a weekly gain over 1 percent. Hong Kong's Hang Seng index .HSI rose 0.3 percent, approaching this week's seven-year highs triggered by inflows from mainland investors. The Shanghai Composite Index .SSECwas up 2.2 percent. Japan's Nikkei stock average .N225 slipped 0.5 percent, poised for a weekly loss around 0.6 percent. After breaking the 20,000 level for the first time in 15 years a week ago, theNikkei has wobbled below it, with investors wary of Japanese corporate earnings reports slated for release from next week. "Even though investors expect companies to post big profits at the end of the financial year, the Nikkei's moves may be contained in a small range after companies' modest guidance," said Masayuki Kubota, chief strategist at Rakuten Securities. Wall Street ended with modest losses on Thursday amid worries about upcoming corporate earnings, and after another spate of uninspiring economic data. US housing starts rose far less than expected in March and factory activity in the mid-Atlantic region grew modestly this month, suggesting the economic momentum will probably not be strong enough for the Federal Reserve to decide to start raising interest rates as early as June. "The report marks more of the same slow and dull picture of health investors have recently become accustomed to for the domestic economy," Andrew Wilkinson, chief market analyst at US electronic broker Interactive Brokers LLC, said in a note to clients. Atlanta Federal Reserve Bank president Dennis Lockhart, a voting member of the Fed's rate-setting committee this year, said the recent "murky" run of US data has him leaning against a June interest rate hike. Lockhart quickly added he was confident the economywill remain on track. Comments from Cleveland Fed President Loretta Mester and Boston Fed President Eric Rosengren also struck dovish tones. Fading expectations for a June rate hike pressured the US dollar. The US unit bought 119.02 yen, nearly flat on the day but well off this week's high of 120.845. The euro bought $1.0771, up about 0.1 percent on the day after climbing as high as $1.0818 on Thursday despite rising concerns about Greece's financial woes. Greek Prime Minister Alexis Tsipras told Reuters on Thursday he was "firmly optimistic" his government would reach an agreement with its creditors by the end of April despite friction over issues such as pension and labor reform. The country's Finance Ministry denied a report by the Financial Times that Athens had approached the International Monetary Fund to request a delay in its loan repayments. Crude oil prices tumbled in Asian trading, giving back the sharp gains made overnight on news that a tribal group made up of former Al Qaeda militants took control of a major southern oil terminal in Yemen. Brent crude LCOc1 shed 1 percent to $63.37 a barrel while US crude CLc1 gave up 1.1 percent to $56.07, after both hit 2015 peaks in the previous session, after the Organization of the Petroleum Exporting Countries (OPEC) said its March production surged, adding to a global supply glut. In other commodities trading, London tin CMSN3 plunged to more than five-year lows, on track for an 11 percent weekly fall, after giving up nearly a quarter of its value this year on growing supply and slack demand. - Reuters