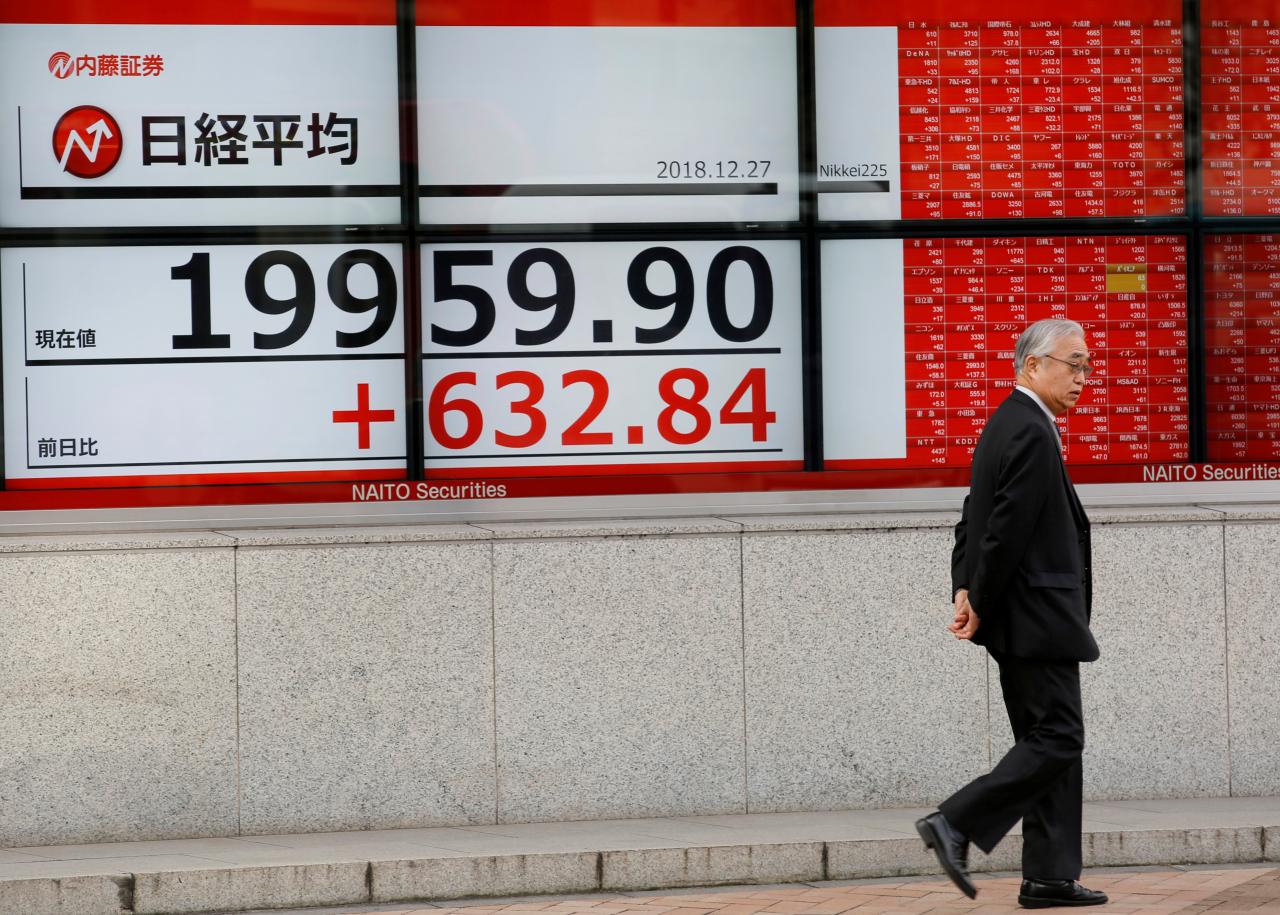 SYDNEY (Reuters) - Asian shares turned tail on the first trading day of the new year as more disappointing economic data from China darkened the mood and erased early gains in US stock futures. MSCI’s broadest index of Asia-Pacific shares outside Japan .MIAPJ0000PUS skidded 1.1 percent as a private survey showed China manufacturing activity contracted for the first time in 19 months. The Caixin/Markit Manufacturing Purchasing Managers’ Index (PMI) for December fell to 49.7, from 50.2 in November, and followed a raft of soft trade data from the Asian region. The Shanghai blue chip index .CSI300 quickly shed 1 percent and South Korea .KS11 fell 0.8 percent. Japan's Nikkei .N225 was closed for a holiday. E-Mini future for the S&P 500 ESc1 lost their early gains to be down 0.2 percent. The Australian dollar, often used as a proxy for China sentiment, lost 0.5 percent to its lowest since February 2016 at $0.7017 AUD=D3. The safe-haven yen extended its broad rally as the U.S. dollar dropped to 109.53 JPY=, near its lowest since June last year. The dollar was otherwise mixed, edging up a little on the euro to $1.1445 EUR= but off a shade on a basket of currencies at 96.166 .DXY. The dollar has been dragged by a steep fall in Treasury yields in recent weeks as investors wagered the US Federal Reserve would not raise rates again, even though it is still projecting at least two more hikes.

AN END TO HIKES

Federal Reserve Chairman Jerome Powell will have the chance to comment on the economic outlook when he participates in a joint discussion with former Fed chairs Janet Yellen and Ben Bernanke on Friday. Also looming are a closely-watched survey on US manufacturing due on Thursday, followed by the December payrolls report on Friday. Fed fund futures <0#FF:> have all but priced out any hike for this year and now imply a quarter point cut by mid-2020. The Treasury market also assumes the Fed is done and dusted. Yields on two-year paper US2YT=RR have tumbled to 2.49 percent, just barely above the cash rate, from a peak of 2.977 percent in November. Yields on 10-year notes US10YT=RR have dived to their lowest since last February at 2.69 percent, making a bullish break of a major chart level at 2.717 percent. The spread between two- and 10-year yields has in turn shrunk to the smallest since 2007, a flattening that has been a portent of recessions in the past. “What is clear is that the global synchronized growth story that propelled risk assets higher has come to the end of its current run,” the Treasury team at OCBC Bank wrote in a note. “Inexorably flattening yield curves and, now, partially inverted U.S. yield curve have poured cold water on further policy normalization going ahead.” The pullback in the dollar and the chance of no more U.S. rate hikes has been a boon for gold. The precious metal fetched $1,280.40 an ounce XAU= to be close to a six-month peak. Oil prices flagged anew after a punishing 2018. US West Texas Intermediate crude (WTI)futures slumped nearly 25 percent last year, while Brent lost 19.5 percent. On Wednesday, US crude futures CLc1 eased 2 cents to $45.39 a barrel, while Brent LCOc1 fell 18 cents to $53.64.