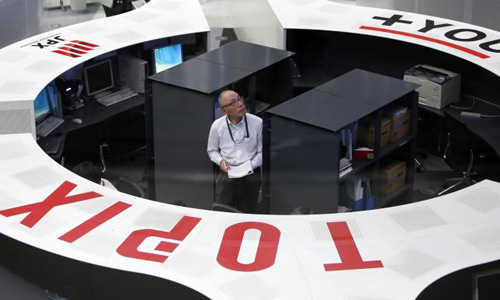 TOKYO - Asian shares rose and the dollar dropped on Monday, after a dismal U.S. jobs report pushed down U.S. Treasury yields as investors pared bets the U.S. Federal Reserve would hike interest rates anytime soon. Labor Department data showed U.S. employers added the fewest jobs in more than a year in March. The rise of 126,000 jobs was well below expectations for a gain of 245,000, according to a Reuters poll of economists. MSCI's broadest index of Asia-Pacific shares outside Japan .MIAPJ0000PUS added 0.6 percent to its highest level since September 2014. But Japan's Nikkei stock average .N225 slumped 1 percent shortly after the open, as a resurgent yen deflated shares of exporters. U.S. stocks were closed on Friday for the Easter holiday, but U.S. stock futures fell after the jobs data, indicating a lower open for stocks later on Monday. U.S. S&P e-mini equity futures ESc1 were thinly traded in Asian time, and down 0.8 percent after shedding 1 percent on Friday. The yield on benchmark 10-year Treasury notes, which moves inversely to prices, hit nearly two-month lows of 1.8 percent on Friday, and stood at 1.841 percent in early Asian trading, keeping pressure on the greenback. "The widespread slowdown in employment growth across sectors suggests that macroeconomic forces are at work, in particular weak global economic growth and the strong U.S. dollar," strategists at Rabobank said in a note to clients. The dollar dipped slightly against the yen to 118.89 yen, while the euro climbed about 0.2 percent on the day to $1.0988. Data from the Commodity Futures Trading Commission released on Friday showed that investors reduced their upside bets on the U.S. dollar in the latest week ended March 31, while net shorts on the euro hit another record high. Crude oil futures took back some of their sharp losses marked before the holiday, after Thursday's preliminary pact between Iran and global powers on Tehran's nuclear program. Brent LCOc1 added about 1 percent to $55.50 a barrel, while U.S. crude futures CLc1 rose about 1.6 percent to $49.14 a barrel. Spot gold rose about 0.5 percent at $1,217.30 an ounce, bolstered by the downbeat U.S. jobs report. Gold tends to drop inversely to rising interest rates, which increase the opportunity cost of holding non-yielding bullion. Higher rates also add to the appeal of the dollar, in which gold is priced, making it more expensive for holders of other currencies. - REUTERS