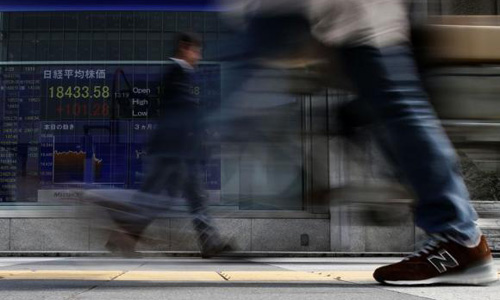 TOKYO (Reuters) - Asian shares prices edged away from five-month highs on Thursday, while the dollar steadied after slipping on Federal Reserve Chair Janet Yellen's indication that the US central bank is in no hurry to hike interest rates. MSCI's broadest index of Asia-Pacific shares outside Japan fell about 0.2 percent, as investors took profits after Yellen's testimony and a China factory survey's better-than-expected headline number lifted it to a five-month high on Wednesday. Japan's Nikkei stock average outperformed, rising about 0.9 percent to a 15-year high, helped by news that the Federation of National Public Service Personnel Mutual Aid Associations, the body managing Japan's national civil service pensions, will raise its target allocation for domestic stocks to 25 percent from 8 percent. "This officially-announced drastic investment strategy is giving renewed excitement to the market," said Shigemitsu Tsuruta, senior strategist at SMBC Friend Securities. MSCI's 46-country world index was up 0.1 percent, and stood just below its double-top of its September peak and a record high hit in July. "On the whole, the world's markets seem likely to be in a risk-on mode. The valuation still looks not that expensive, except for US markets," said Hirokazu Kabeya, senior strategist at Daiwa Securities. The price-earnings ratio of US shares stood at 19.6, but the world's markets on the whole were traded at 16.3 times earnings, according to Thomson Reuters StarMine. Wall Street shares were narrowly mixed on Wednesday as a positive mood was offset by a 2.6 percent fall for Apple, which saw some profit-taking after gaining 21 percent since the start of this year. Data released overnight showed solid US new homes sales in January despite snow storms in the country's Northeast. The US data followed Wednesday's survey showing activity in China's factory sector edged up to a four-month high in February. Yellen's congressional testimony on Tuesday and Wednesday suggested the Fed is in no rush to raise rates, even though technically she did not rule a hike as early as in June. "The only thing that is clear is that the FOMC (Federal Open Market Committee) has given itself more flexibility than before," said Ray Attrill, global co-head of FX strategy at National Australia Bank in Sydney. "If US data begins to positive surprise once more, the market will quickly jump back on to the 'Buy USD' bandwagon." Following Yellen's comments, US bond yields have fallen sharply this week, with the 10-year notes yielding 1.956 percent, compared to 2.133 percent at the end of last week and a six-week high of 2.164 percent on Feb. 18. The lower yields weighed on the dollar, moved off its lows in Asian trade. The dollar index was nearly flat on the day at 94.184, while the greenback edged up slightly against the yen to 118.93 yen, moving back toward this week's high of 119.84. The euro stood at $1.1366, slightly higher than Wednesday's levels. Oil prices erased gains after surging on Wednesday following comments from Saudi Arabia's oil minister that oil demand was growing. Brent crude shed about 0.6 percent to $61.25 a barrel, while US crude was down 0.8 percent at $50.57. Spot gold added about 0.3 percent on the day to $1,208.65 per ounce, rising for a second straight session and pulling away from a seven-week low hit on Tuesday.