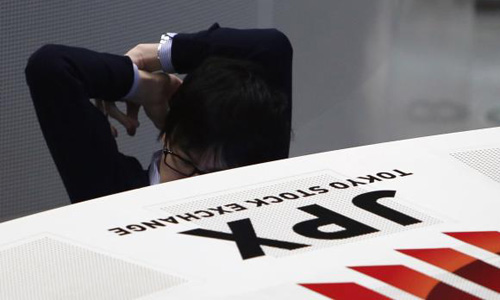 TOKYO (Reuters) - Asian shares began the week on the back foot on Monday after a downbeat session on Wall Street, while the euro skidded to a fresh 12-year low on divergent monetary policy paths between the United States and the euro zone. MSCI's broadest index of Asia-Pacific shares outside Japan was down 0.3 percent in early trade, pushing back toward last week's seven-week lows. Friday's weak U.S. inflation data failed to derail expectations that the Federal Reserve will tighten monetary policy, and U.S. shares slumped on concerns about the impact of higher rates and a stronger dollar on corporate profits. The S&P 500 marked its third straight losing week, though it stood just 3 percent below its record high set early this month. Investors' main focus this week is on the Fed's two-day meeting beginning on Tuesday. After successive months of strong jobs data, expectations have been growing that the Fed will point towards a June rate rise by dropping a pledge to be "patient" in considering such a move. "The FOMC will be afraid that dropping patience without making some reference to the USD or international asset market conditions will lead to an even faster USD pickup," Steven Englander, global head of currency strategy at Citi, said in a note to clients. "Paradoxically, if they are serious about hiking mid-year, a USD breakout may limit their options," he added. Data on Friday showed that U.S. producer prices fell in February for a fourth straight month, pointing to tame inflation that suggests the central bank has the scope to hold off. Japan's Nikkei stock average was flat in early trade, after notching a fresh 15-year closing high on Friday and logging its fifth straight winning week. The Bank of Japan will announce its latest policy decision on Tuesday, a day before the Fed, and is widely expected to maintain its aggressive quantitative and qualitative asset-buying program to stoke growth and sustainable inflation of 2 percent. The euro slipped as low as $1.0457 early in the Asian session, its lowest since January 2003, and last stood at $1.0488, down about 0.1 percent on the day. The euro has dropped about 25 percent versus the dollar since around the middle of 2014. It suffered its biggest weekly fall since September 2011 last week, shedding 3.2 percent as the European Central Bank launched its 1.1 trillion euro bond-buying stimulus program. Goldman Sachs now expects the euro to slide to $0.80 by the end of 2017. Against the yen, the euro edged down about 0.1 percent to 127.24, not far from a 21-month trough of 126.86 set on Friday. The common currency's weakness gave a lift to the dollar index, which touched a 12-year high of 100.420 in early trade. It was last at 100.240. Against its Japanese counterpart, the dollar edged down on the day to 121.34, but was still not far from a nearly eight-year high of 122.04 hit on Tuesday. Oil continued to tumble after the International Energy Agency said on Friday that the global supply glut is growing and U.S. production shows no sign of slowing. U.S. crude and Brent crude were both down more than 2 percent in early Asian trade at $43.83 a barrel and$53.37, respectively.