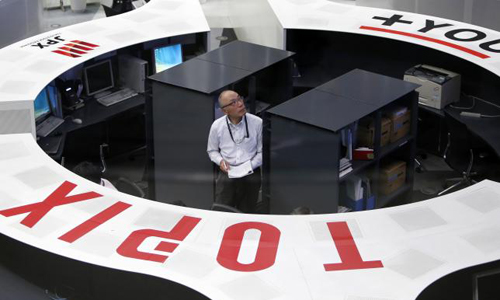 TOKYO (Reuters) - Asian shares edged up in early trade on Thursday, but gains were tempered by weak US private sector employment and manufacturing data that raised concerns ahead of Friday's key employment figures. MSCI's broadest index of Asia-Pacific shares outside Japan .MIAPJ0000PUS was up about 0.2 percent in cautious trade, shrugging off modest overnight losses on Wall Street. Japan's Nikkei stock average .N225 opened higher and was up 0.6 percent after skidding to a three-week low in the previous session. On Wednesday, the ADP National Employment Report showed that US private employers added 189,000 jobs last month, falling well short of economists' expectations for a rise of 225,000 jobs. The figure was the weakest since January 2014. Friday's non-farm payrolls are expected to show an increase of 245,000 jobs in March, following a gain of 290,000 in February, according to economists polled by Reuters. Separate data on Wednesday showed the pace of US manufacturing growth in March slowed to its slowest in nearly two years. The dollar slumped after the data as it reinforced concerns that its recent rally has weighed on exports. The data also raised bets the Federal Reserve might not hike interest rates until late 2015. "Slower US growth and softer inflation have given the Fed reasons to delay and flatten its rate hiking path," strategists at Barclays said in a note to clients. "These developments have caught the USD a bit ahead of itself, but given the recent correction, we expect it to stabilize around current levels. We think the USD is likely to take a break before resuming its uptrend at a slower pace," they said. The greenback was down about 0.2 percent on the day at 119.55 yen JPY=, while the euro added about 0.1 percent to$1.0768 EUR=. The euro also got a lift from Wednesday's data showing manufacturing activity across the euro zone is accelerating. Most US markets will be closed on Friday for Easter holidays, with some European markets closed Friday through Monday, to reopen on Tuesday. - REUTERS