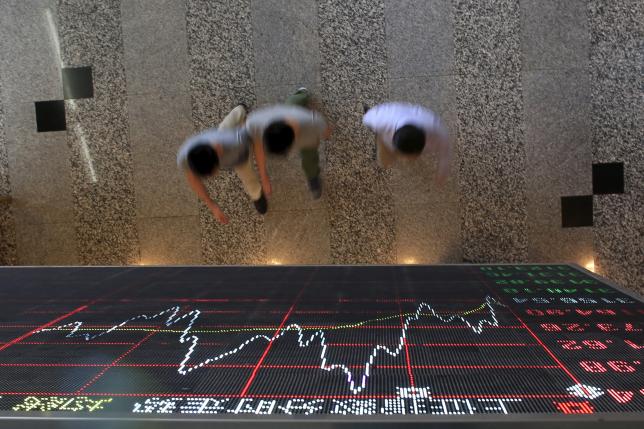 SYDNEY (Reuters) - Asian shares stepped back from decade highs on Tuesday as Chinese stocks stumbled for a second straight session, while the US dollar trod water ahead of a crucial Senate vote on tax reform. Investor confidence in China has been dented by rising bond yields as Beijing steps up its crackdown on shadow banking and other risky forms of financing. Higher borrowing costs threaten to squeeze corporate profits. Mainland stocks have jumped 22 percent in 2017, with the gains concentrated in a handful of large index-weighted stocks. The index was down 0.3 percent while Shanghai’s SSE Composite index slipped 0.2 percent at 0221 GMT. “The aspect of poor breadth and participation was actually the point for Chinese authorities who have been concerned with the equity market continually heading higher on very low participation,” said Chris Weston, Melbourne-based chief strategist at IG Markets. “The question is whether further downside in Chinese mainland equities continues in the session ahead and will there be a spillover into Hong Kong and potentially even Japan, Korea and Australia?” MSCI’s broadest index of Asia-Pacific shares outside Japan slipped 0.3 percent from last week’s high of 570.21 points. It was on track to end November in the black. The index has been on an uptrend most of this year, posting a monthly loss only once in 2017. Australian shares were flat while Japan’s Nikkei rose 0.2 percent. Wall Street had been mixed on Monday, with the S&P 500 off a touch, the Nasdaq losing 0.1 percent and the Dow up 0.1 percent. FLAT CURVE The dollar was a touch softer on the yen at 111.27, and within spitting distance of a recent 2-1/2-month low, as bulls fret about potential delays in US tax cuts. The euro was steady at $1.1898, within reach of a two-month high. The dollar got a brief boost overnight when President Donald Trump tweeted that the tax cut bill was “coming along very well”. The tweet came after a meeting with Senate Republican tax-writers on Monday ahead of a crucial vote on the Senate floor that could come as early as Thursday. Separately, the US Senate Banking Committee holds a hearing on Tuesday to confirm the nomination of Jerome Powell at the helm of the Federal Reserve. If confirmed, Powell will have to balance tightening policy against still sluggish wages and inflation. The bond market is concerned the Fed will hike rates too far, keeping inflation too low and ultimately slowing the economy. That has been a major force in the remarkable pace of curve flattening in recent weeks. The 2s/10s yield curve is only 58 basis points from inverting - a classic signal that recession is just around the corner. In commodity markets, US light crude was off 29 cents at $57.82, having fallen more than a dollar overnight. Brent crude slipped 13 cents to $63.71, but not far from a near 2-1/2 year peak of $64.65 touched earlier this month. Spot gold inched lower to $1,293.30.