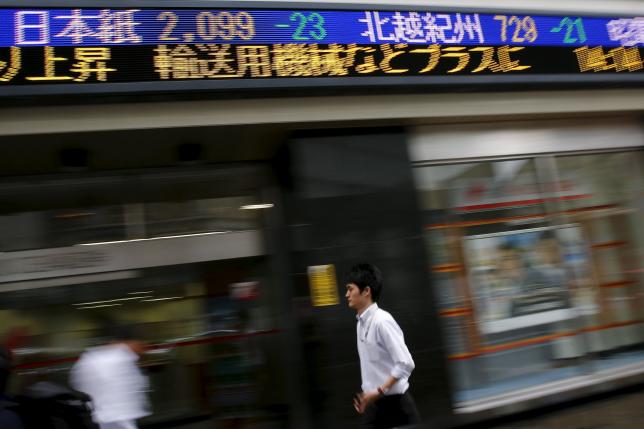 TOKYO - Asian shares extended early gains on Thursday, taking heart from a late recovery on Wall Street and from efforts by China's central bank to slow the sharp descent of the yuan. Losses for the currency early Thursday were slight after the central bank set a midpoint that was again lower than the previous day's, but not as weak as some feared. Still, traders remain cautious about how low the yuan might go. Sources told Reuters some powerful voices in the government are pushing for an even deeper devaluation to help China's struggling exporters. The People's Bank of China set its midpoint rate CNY=SAEC at 6.4010 per dollar prior to market open, weaker than the previous fix of 6.3306. The yuan opened slightly weaker but the gap between the guidance rate and the traded rate closed sharply as the central bank moved to stem a sharp selloff that saw the currency lose around 4 percent in just two days. MSCI's broadest index of Asia-Pacific shares outside Japan .MIAPJ0000PUS was up 0.7 percent, after U.S. shares rebounded and two out of three main indexes end in positive territory. Japan's Nikkei stock index .N225 was up 0.4 percent, shrugging off downbeat capital expenditure figures. Japanese data released before the market open showed Japan's core machinery orders fell a greater-than-expected 7.9 percent in June, down for the first time in four months. The risk-averse mood after China's moves this week had heightened the appeal of safe-haven government debt, which then pushed down U.S. Treasury yields and pressured the US dollar. But benchmark 10-year note prices fell from three-month highs after a lacklustre auction, with the 10-year yield at 2.162 percent US10YT=RR in Asian trading, compared to its US close of 2.130 percent. The dollar also suffered as investors pared back bets that the U.S. Federal Reserve's long-awaited interest rate hike would come as early as its Sept. 16-17 meeting. Short-term U.S. interest rates markets indicated investors were pricing in no more than a 40 percent chance that the Fed will raise rates next month. "Pressure to unwind dollar long positions is mounting and focus is on how long this trend will continue. 'China risk' has dampened hopes for a September rate hike and upcoming data could further chip away at expectations for a Fed tightening," said Junichi Ishikawa, market analyst at IG Securities in Tokyo. Against the yen, the dollar was about 0.1 percent higher at 124.35 JPY=. The euro was steady at $1.1154 EUR= after scaling a one-month peak of $1.1215 on Wednesday, helped by the unwinding of euro-funded carry trades in the yuan EURCNH= and other emerging market currencies. In commodities trading, spot gold XAU= was down about 0.2 percent at $1,122.20 an ounce after logging its fifth straight session of gains. Three-month copper on the London Metal Exchange CMCU3 fell about 0.8 percent to $5,145.50 a tonne, moving back toward the previous session's six-year low of $5,062 a tonne. Crude oil futures gained overnight on lower US crude stockpiles, but remained not far from six-year lows plumbed this week on fears that China's weaker currency would hit imports. U.S. crude CLc1 was down about 0.1 percent at $43.28 a barrel, while Brent LCOc1 added about 0.2 percent to $49.75. -Reuters