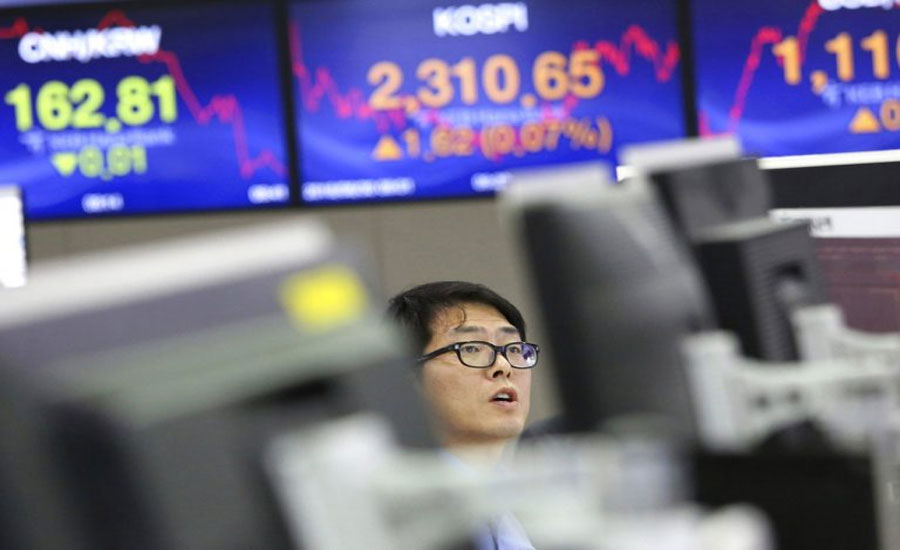 SYDNEY (Reuters) - Asian shares got their losses extended on Monday as a sharp escalation in the Sino-US trade war kept financial markets on edge. The Japanese yen and bonds held near recent peaks as nervous investors stuck with perceived safe havens. US President Donald Trump abruptly decided on Thursday to slap 10% tariffs $300 billion in Chinese imports, stunning markets and ending a month-long trade truce. China vowed on Friday to fight back. MSCI’s broadest index of Asia-Pacific shares outside Japan .MIAPJ0000PUS fell for a seventh straight day to a two-month trough of 502.83, down 0.25%, marking the longest stretch of losses since October 2018. Japan's Nikkei .N225 slipped 1.1% to the lowest since early June, while Australian shares were also down for their fourth straight session in the red. South Korea's Kospi .KS11 tumbled 1.2% to hit the lowest since Dec.2016. Oil prices were also pulled down again on demand worries. The grim mood followed declines on Wall Street on Friday with MSCI’s gauge of world stocks. MIWD00000PUS posting its largest weekly loss of the year. “Aftershocks from President Trump’s Thursday (tariff) announcement... are set to dominate the global economic and financial landscape in coming weeks and months,” said Ray Attrill, head of forex strategy at National Australia Bank. The trade war between the world’s two largest economies has already disrupted global supply chains and slowed economic growth. The abrupt escalation capped a critical week for global markets after the U.S. Federal Reserve delivered a widely anticipated interest rate cut and played down expectations of further easing. However, investors were not buying Fed Chair Jerome Powell’s claim that the 25-basis-point rate reduction was a mere “mid-cycle adjustment to policy”. Futures are now pricing in deeper cuts than before last week’s Fed meeting. The terminal US rate <0$FF:> is now seen at 1.22%, 93 basis points below the current effective rate. Expectations of further monetary policy easing sent the dollar skidding. It held near a seven-month trough against the Japanese yen at 106.57 JPY= while the dollar index .DXY against a basket of six major rivals steadied at 98.08 after two straight days of losses. The yen and the Swiss franc CHF= were boosted by safe-haven demand from the escalating trade tensions. Trump is also eyeing tariffs on the European Union though he hasn't said anything officially yet. The euro EUR= held firm after two days of gains against the dollar at $1.1113. Sterling GBP= hovered near 2017 lows at $1.2155, pressured by concerns of Britain exiting the European Union without a deal in place. The pound has been whiplashed since late last month when Boris Johnson, a figurehead for the "leave" campaign in the 2016 Brexit referendum, became the country's prime minister. The Australian dollar AUD=D3, a liquid proxy for emerging market assets, hovered near a seven-month trough at $0.6792 after losing 1.6% last week. The Reserve Bank of Australia (RBA) will hold its monthly policy meeting on Tuesday where it is widely expected to hold rates at all-time lows of 1%. Safe-haven assets have been in vogue with German 10-year government bond yields DE10YT=RR on Friday dropping to an all-time low of -0.502% and the country’s entire government bond yield curve turning negative for the first time ever. Benchmark 10-year Treasury notes US10YT=RR held near all-time highs to yield 1.8550% on Monday. Last week, yields touched their lowest since Trump’s election in November 2016. Spot gold XAU= was slightly firmer at $1,442.11, within striking distance of a recent six high of $1,452.60. Oil extended losses with U.S crude CLc1 off 31 cents at 55.35 and Brent LCoc1 down 58 cents at $61.31.