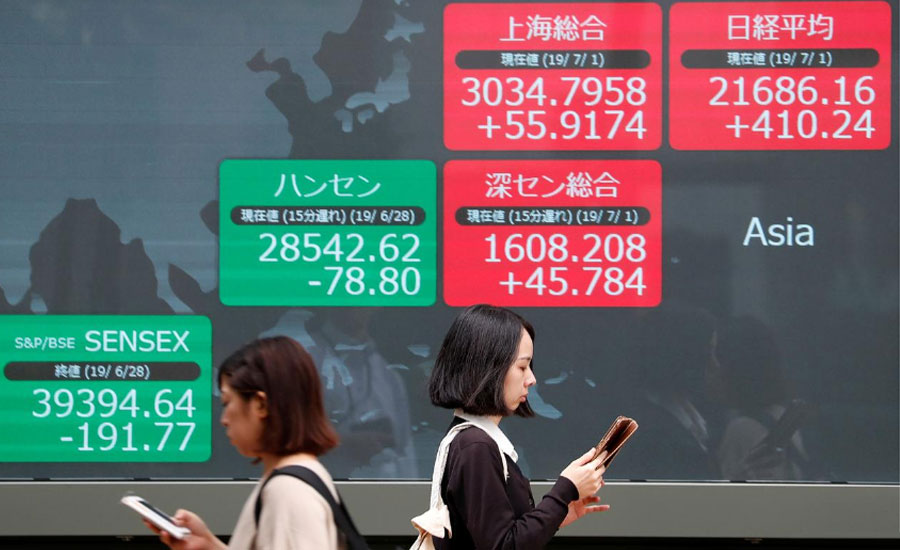 SHANGHAI (Reuters) - Major Asian equity indicators nudged higher on Monday as investors awaited US retail sales data and corporate earnings to gauge the health of the world’s biggest economy, with markets remaining focused on a likely US rate cut this month.
MSCI’s broadest index of Asia-Pacific shares outside Japan .MIAPJ0000PUS was up 0.17%, with losses in Chinese shares capping gains elsewhere in the region. China's blue-chip CSI300 index .CSI300 was 0.4% lower. South Korea's KOSPI .KS11, which spent the morning flickering between small gains and losses, was last up 0.24%. Shares in Taiwan .TWII were flat, while the Australian market was up less than 0.1%. Japan's Nikkei stock index .N225 dipped 0.74%. Encouraging Chinese economic data on Monday had provided some relief to investors worried about the economic outlook, but broad pressure across global business and investment from Sino-US trade frictions and slowing world growth reinforced expectations of policy easing by major central banks. “A US rate cut should make it easier for central banks in Asia to ease their policies, boosting domestic demand in the region,” said Yukino Yamada, senior strategist at Daiwa Securities. “We still don’t know what to expect from the U.S.-China trade war ... But there are vague expectations that Trump will be quiet during summer and the issue will be put on the back burner until near China’s National Day (in early October),” she said. Overnight, however, US President Donald Trump showed no signs of softening his stance on China, warning that Washington could pile on more pressure as bilateral trade talks sputtered along. US data on Tuesday is expected to show that retail sales gained 0.1% in June, according to the median estimate of economists polled by Reuters. But a decline in net interest margin reported by Citigroup (C.N) in its mixed quarterly report underlined risks for financial firms in a lower interest rate environment. That decline partly overshadowed better-than-expected profit numbers, triggering a fall in shares of other banks on concerns that it would presage lower profits across the industry. “Clearly the biggest risk to the most recent rally is the earnings season,” said Ryan Felsman, senior economist at CommSec in Sydney. Signs of trade tensions weighing on corporate profits and the fading impact of tax cuts would underscore the U.S. Federal Reserve’s concerns over slowing business investment, he said. “That feeds into the narrative of concerns around the global economy, the slowing in the US economy, but also the need for potentially more aggressive rate cuts from the Fed to support the US economy going forward,” Felsman said. Markets have fully priced in a 25-basis point cut by the Fed at its meeting at the end of this month. The quiet Asian trading session followed an equally subdued day on Wall Street, with the Dow Jones Industrial Average .DJI rising 0.1%, the S&P 500 .SPX gaining 0.02% and the Nasdaq Composite .IXIC adding 0.17%.

Ahead of the release of U.S. retail sales figures, signs of an improving economic situation in the United States have led to a steepening of the U.S. yield curve, led by higher longer-dated yields. On Tuesday, the yield on benchmark 10-year Treasury notes US10YT=RR turned down slightly to 2.0852% compared with its U.S. close of 2.092% on Monday. The two-year yield US2YT=RR, closely watched as a gauge of traders’ expectations for Fed fund rates, extended its falls to 1.829% compared with a U.S. close of 1.833%. In the currency market, the dollar was up 0.06% against the yen at 107.97 JPY=, and the euro EUR= ticked up 0.02%, buying $1.1259. The dollar index .DXY, which tracks the greenback against a basket of six major rivals, was flat at 96.933. Oil prices found some support after earlier easing on signs that the impact of a tropical storm on U.S. Gulf Coast production would be short-lived. U.S. West Texas Intermediate (WTI) crude CLc1, added 0.07% to $59.62 a barrel and Brent crude LCOc1, the global benchmark, gained 0.23% to $66.63 per barrel. Trade in gold echoed the cautious tone of equity markets ahead of U.S. data. The precious metal was last down 0.02% on the spot market XAU= at $1,413.40 per ounce.