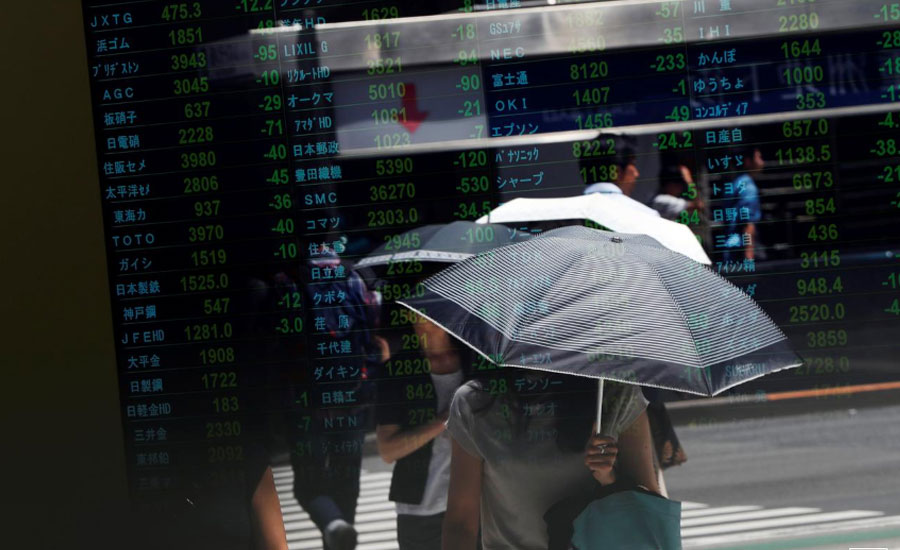 TOKYO (Reuters) - Asian share prices ticked up on Tuesday as some investors clung to hopes that the fourth quarter will bring progress in resolving the United-States trade war that’s cast a shadow over the global economy.
Japan's Nikkei .N225 rose 0.74% while MSCI's broadest index of Asia-Pacific shares outside Japan .MIAPJ0000PUS inched up 0.24% and Australia's benchmark by 0.25%. Chinese markets will be shut for a week, starting on Tuesday, to mark 70 years since the founding of the People’s Republic of China. U.S. stock futures ESc1 rose 0.35% in Asia, a day after the S&P 500 SPX gained 0.50%. Technology sectors led New York gains on Monday while US-listed shares of Chinese firms bounced up a tad, after big falls on Friday, with Alibaba  up 0.75% and Baidu (BIDU.O) gaining 1.53%. During the July-September quarter, the S&P500 advanced 1.21%. In Europe, the benchmark stock index gained 2.15% in the quarter to end at a 16-month high, thanks in part to a weak euro in Asian. White House trade adviser Peter Navarro dismissed reports that the Trump administration was considering delisting Chinese companies from US stock exchanges as “fake news”, giving short-term players an excuse to buy back risk assets. “Whether it was a fake news or not, it is becoming harder to know exactly what the US administration will be doing,” said Takashi Hiroki, chief strategist at Monex Securities. China and the US are due to resume high-level trade talks next week in Washington. “It’s not clear how the US-China talks will progress, given there are hard-liners against China in the administration. But if there’s no further escalation in the upcoming meeting, markets will be relieved,” Hiroki said. While the tussle over trade and technology between the world’s two largest economies has intensified, some investors are sticking to hopes of a compromise. They say a tentative deal could be reached by the end of this year, given that President Donald Trump’s administration would strive to avoid the US economy falling into a recession in an election year. “While we ought not to have preconception, for Trump, not having made a deal with China could be increasingly seen as negative ahead of the election next year,” said Tomoo Kinoshita, chief global strategist at Invesco Asset Management in Tokyo. In the currency market, the euro extended its decline on worries about sluggish growth in the currency bloc. The euro traded at $1.0888 EUR=, having slipped to a near 2 1/2-year low of $1.0885 in US trade on Monday. The yen was slightly weaker at 108.24 yen to the dollar JPY=, not far from last month's low of 108.48. The Japanese currency showed no reaction to the Bank of Japan’s tankan survey showing business confidence at big Japanese manufacturers worsened in the three months to September to its lowest level in six years. The Australian dollar fetched $0.6739 AUD=D4, down 0.2% and near three-week low of $0.6739 touched last month ahead of a likely rate cut by the Reserve Bank of Australia later in the day. A majority of 35 economists polled by Reuters expect the RBA to cut the cash rate for the third time this year. The New Zealand dollar slipped to a four-year low of $0.6238 NZD=D4, following Monday's weak local business sentiment data. Gold fell to a two-month low on the back of a robust U.S. dollar, last trading at $1,468.50 per ounce XAU=. Oil prices rebounded in early Asian trade on Tuesday after production at the world’s largest oil producers fell in the third quarter, although demand concerns continued to keep a keep a lid on prices. US West Texas Intermediate (WTI) crude CLc1 fell 3.3% on Monday before rise 0.39% early on Tuesday to $54.28 per barrel.