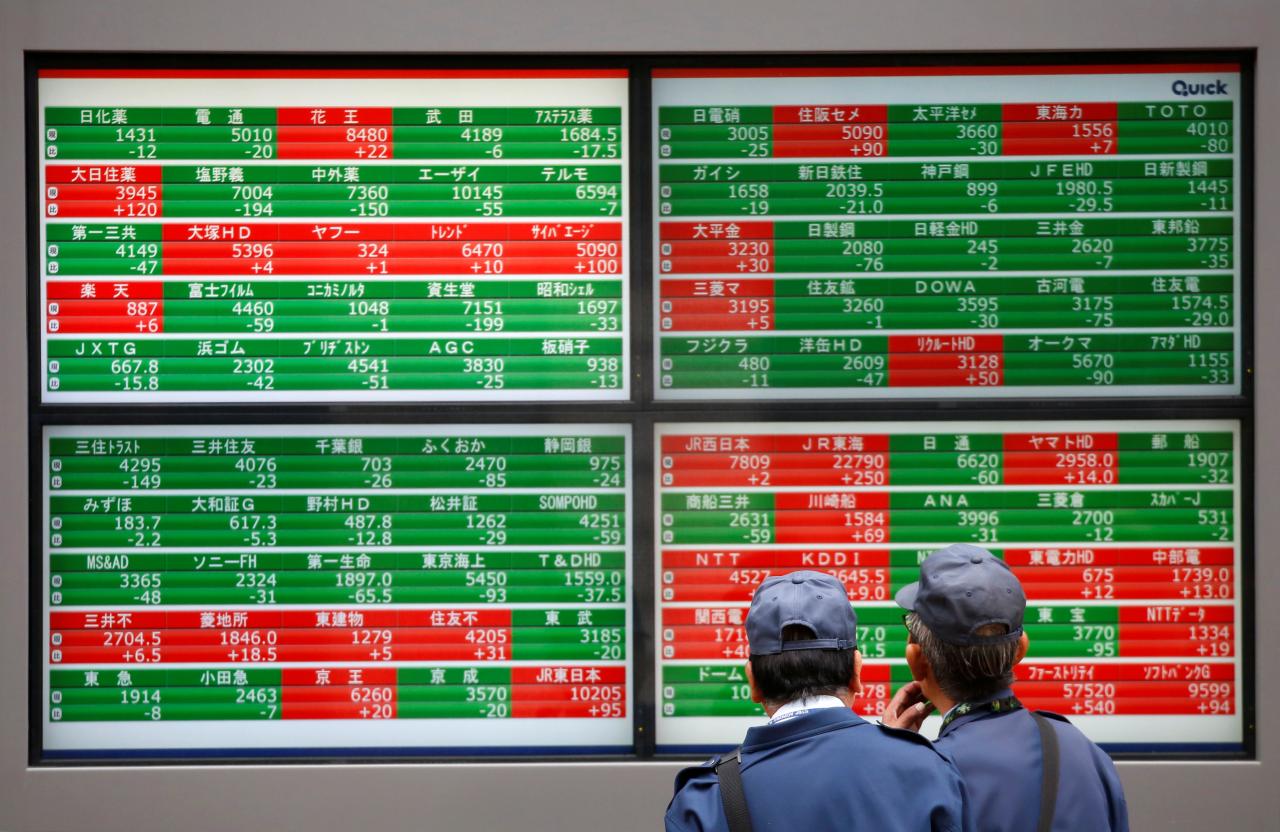 TOKYO (Reuters) - Asian shares tumbled on Friday after China reported a set of weak data, fanning fresh worries of a sharp slowdown in the world’s second-biggest economy and leaving investors fretting over the wider impact of a yet unresolved Sino-U.S. trade dispute.
MSCI's broadest index of Asia-Pacific shares outside Japan .MIAPJ0000PUS fell 1.4 percent, while Japan's Nikkei .N225 dropped 2.1 percent. Mainland China's benchmark Shanghai Composite .SSEC and the blue-chip CSI 300 .CSI300 declined 0.6 percent and 0.9 percent, respectively, and Hong Kong's Hang Seng .HSI tumbled 1.6 percent. China’s November retail sales grew at the weakest pace since 2003 and industrial output rose the least in nearly three years as domestic demand softened further, underlining rising risks to the economy as Beijing works to defuse a trade dispute with the United States. The Chinese yuan weaked 0.2 percent to 6.8910 per dolalr CNH=D4 in the offshore trade following the data. “Although hopes of progress in US-China talks and cheap valuations are supporting the market for now, we have lots of potential pitfalls,” said Nobuhiko Kuramochi, chief strategist at Mizuho Securities. “If US shares fall below their triple bottoms hit recently, that would be a very weak technical sign.” Overnight on Wall Street, the S&P 500 .SPX ticked down 0.02 percent to 2,650, not far from its 6-1/2-month closing low of 2,633 touched on Nov 23, while the Nasdaq Composite .IXIC dropped 0.39 percent. US corporate earnings due next month could throw a spotlight on the impact from the U.S. tariffs on imports from China, while there is risk of a government shutdown and further political stalemate in a divided US congress, he said. A Chinese commerce ministry spokesman said on Thursday China and the United States are in close contact over trade and that any US trade delegation would be welcome to visit. But that has hardly dispelled concerns about a broadening confrontation between the two economic heavyweights. China said on Thursday a Canadian businessman is being investigated on suspicion of harming China’s security, days after a former Canadian diplomat was detained in an escalating diplomatic row. The moves are seen as a reaction to Canada’s arrest on Dec. 1 of Chinese executive Meng Wanzhou, the chief financial officer of Huawei Technologies, for extradition to the United States. [HWT.UL]. The euro changed hands at $1.1362 EUR=, stuck in its well-worn $1.13-$1.14 range over the past few days. The European Central Bank ended its 2.6 trillion euro crisis-fighting bond purchase scheme but pledged to continue reinvesting maturing bonds - thereby avoiding shrinking its balance sheet - for an extended period of time. The plan lifted Portuguese and Irish government bond prices sharply on Thursday. “We expect the first rate hike in the fall of 2019. The ECB continues to pursue the objective of an expansionary monetary policy. With today’s decision to end QE, the ECB is only taking very lightly the foot off the accelerator of monetary policy, which is by no means a real normalisation of monetary policy.” said Oliver Eichmann, co-head of EMEA fixed income at DWS in Frankfurt. Sterling’s rally fizzled as signs that the British parliament was headed towards a deadlock over Brexit prompted traders to take profits from its gains made after Prime Minister Theresa May had survived a no-confidence vote. May admitted on Thursday she did not expect a quick breakthrough in Brexit talks that would help get the deal through parliament. The European Union has said the agreed Brexit deal is not open for renegotiation even though its leaders on Thursday gave May assurances that they would seek to agree a new pact with Britain by 2021 so that the contentious Irish “backstop” is never triggered. The currency traded at $1.2625 GBP=D3, off Wednesday's low of $1.2477, but remains on track to post its fourth consecutive week of losses, with a fall of 0.9 percent so far this week. The dollar stood at 113.45 yen JPY=, down 0.1 percent on the day but having risen from this week's low of 112.245 set on Monday. The kiwi NZD=D4 fell 0.8 percent to $0.6801 after the central bank said it was considering almost doubling the required capital banks would need to hold to bolster the financial system's capacity to handle any shocks. Oil prices gave up some of their Thursday’s gains following inventory declines in the United States and expectations that the global oil market could have a deficit sooner than they had previously thought. The International Energy Agency said in its monthly report that OPEC’s output agreement with Russia and Canada’s decision to mandate production cuts could create an oil market supply deficit by the second quarter of next year. [IEA/M] Both Brent crude LCOc1 and US light crude CLc1 gained more than 2.5 percent on Thursday. US crude last traded at $52.40 per barrel, down 18 cents or 0.35 percent.