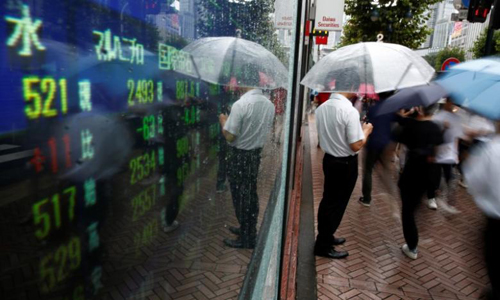 SINGAPORE- Asian shares were mostly lower on Tuesday, while oil prices hovered near one-year highs on growing expectations of an output cut by OPEC producers.
Brent crude LCOc1, slipped 0.2 percent to $53.05 a barrel after surging as much as 3 percent on Monday. U.S. crude futures CLc1 dipped a similar amount to $51.26, after jumping to a four-month high in the previous session. The overnight gains came after Russia said it was ready to join the Organization of Petroleum Exporting Countries in limiting crude output and Algeria called for similar commitments from other non-OPEC producers. OPEC aims for agreements to cut about 700,000 barrels per day in its first reduction in eight years. In equity markets, MSCI's broadest index of Asia-Pacific shares outside Japan .MIAPJ0000PUS retreated 0.9 percent after creeping higher on Monday as investors saw less chance of Republican nominee Donald Trump winning next month's presidential election. But Japan's Nikkei .N225 added 1.1 percent to hit the highest level in more than a month, thanks to a weaker yen. In South Korea, Samsung Electronics (005930.KS) slumped more than 7 percent and was on track for its biggest one-day decline in more than four years as the company struggles to contain a deepening crisis over its Galaxy Note7 phone. The company halted sales of the Note 7 phones on Tuesday and told owners to stop using them while it investigates the reports of fires in the devices. The world's biggest smartphone maker has recalled 2.5 million Note 7s due to faulty batteries, and the latest reports of fires in replacement devices is raising fresh doubts about the firm's quality control procedures. Samsung's woes pulled South Korea's KOSPI .KS11 down 1 percent. China's CSI 300 index .CSI300 advanced 0.3 percent, while Hong Hong's Hang Seng index slipped 1 percent .HSI Overnight, U.S. stock indexes closed up between 0.5 percent and 0.7 percent, after the pan-European FTSEurofirst 300 .FTEU3 index ended the day 0.9 percent higher. "The oil market news proved immensely positive for equities," Angus Nicholson, market analyst at IG in Melbourne, wrote in a note. The dollar retained overnight gains on growing expectations that the Federal Reserve will raise interest rates this year. Traders have priced in a 70 percent chance that the Fed will hike at a Dec. 13-14 policymakers' meeting, up from 66 percent early Friday, according to CME Group's FedWatch tool. Investors are looking to Wednesday's release of minutes of the latest Federal Reserve Open Market Committee meeting to see how close the Fed was to hiking rates last month. The U.S. dollar strengthened 0.3 percent to 103.955 yen JPY=D4 on Tuesday, adding to its 0.7 percent gain on Monday. The dollar index .DXY, which tracks the greenback against a basket of six global peers, added 0.15 percent to 97.074, after climbing 0.3 percent on Monday. The euro EUR=EBS inched down 0.1 percent to at $1.1127. The British pound GBP= continued its drop, falling 0.3 percent to $1.2309 on Tuesday, down 5.1 percent this month. The Mexican peso MXN= held on to most of its 2 percent gain on Monday against the U.S. dollar on views that Trump's chances of winning the election were diminishing. Trump has been sharply critical of the country during the campaign. Paul Ryan, the top Republican in the U.S. Congress, all but conceded on Monday that Hillary Clinton was likely to win the White House on Nov. 8, and said he would put his full energy into preserving Republican majorities in Congress so as not to give her a "blank check." Ryan, speaker of the House of Representatives, said he would not defend Trump or campaign for him after the uproar over the New York businessman's sexually aggressive comments that surfaced on Friday. "This is a strong signal that many of the Republican establishment believe Trump's campaign is so toxic that they are seeking to dissociate themselves from it," IG's Nicholson said. -Reuters