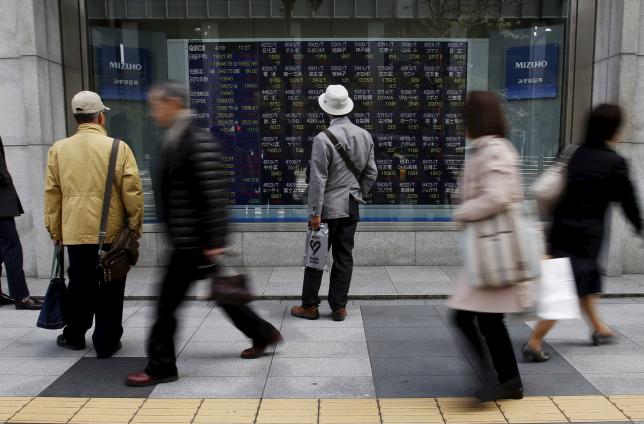 TOKYO - Asian shares advanced close to recent highs on Friday, and were on track for weekly gains, while the dollar gave up some of its overnight rise. MSCI's broadest index of Asia-Pacific shares outside Japan .MIAPJ0000PUS was up about 0.5 percent, not far from the previous session's peak which was the highest since September, and on track for a robust weekly gain of over 3 percent. Hong Kong's benchmark Hang Seng Index .HSI was up about 0.5 percent after surging to seven-year highs in the previous session on money inflows from mainland China investors who are seeking cheaper shares. The Shanghai Composite Index .SSEC added 1.4 percent. Foreign-currency denominated B-shares trading in Shanghai and Shenzhen also rallied. Shanghai's dollar-denominated B-share index .SSEB rose 9 percent to a seven-year high in its largest one-day rally since 2009, with every index component rising by 10 percent, the maximum daily limit. Japan's Nikkei stock average .N225 was up 0.1 percent after earlier breaking the 20,000 level for the first time since April 2000. Markets showed little reaction to data showing China's consumer inflation stayed flat at 1.4 percent in March, while producer prices fell slightly less than projected, keeping pressure on profit margins at Chinese companies as Beijing struggles to stimulate growth. "Overall, the Chinese economy is still facing serious downward pressure without any substantial improvement, and the deflationary risk is still there," said Yu Pingkang, chief economist at Hutai Securities in Shenzhen, adding that the central bank should roll out more monetary easing measures to lower real financing costs and boost growth. Wall Street posted solid gains overnight, and European markets ended higher after German industrial output and trade data showed the continent's largest economyimproving in February. Europe's EuroFirst 300 index .FTEU3 surged 1.1 percent to its highest level since July 2007. News that Greece had made a 450 million euro loan payment to the International Monetary Fund, securing extra emergency lending for its banks and helped improve global risk sentiment, though it remained unclear whether Athens could satisfy creditors who remain sceptical on the country's economic reforms. US Treasury yields rose overnight on the Greek news, weak demand at a sale of 30-year bonds, and a smaller-than-expected rise in weekly jobless claims that alleviated some concern about the US labour market after last week's dismal March payrolls report. The yield on the benchmark 10-year Treasury note US10YT=RR stood at 1.954 percent in Asian trade, not far from its US close of 1.958 percent on Thursday. The US Labor Department said workers filing for first-time jobless benefits totalled 281,000 last week, fewer than what analysts had forecast, and bringing the four-week average of claims to its lowest since 2000. "Investors are still unwinding post-payroll pessimism so a relatively innocuous initial claims print touched off a USD and bond yield rally," Steven Englander, global head of G10 FX strategy at CitiFX in New York, said in a note. Against the yen, the dollar climbed to a three-week high of 120.74 JPY= overnight, moving well away from its post-payrolls low of 118.71 yen a week ago. It was last at 120.54 yen, down slightly on the day. The euro added about 0.2 percent on the day to $1.0676 EUR= after dipping to a three-week low of $1.0637 on Thursday. The common currency's recovery helped push down the dollar index .DXY to 98.877, down about 0.3 percent on the day and moving away from its 12-year peak of 100.390 set last month. Brent crude oil futures remained firm after rising on Thursday on strong German economic data and uncertainty about negotiations on Iran's nuclear program. Brent LCOc1 added about 0.4 percent to $56.79 a barrel. - Reuters