Asian shares propped up by hopes for Sino-US trade deal 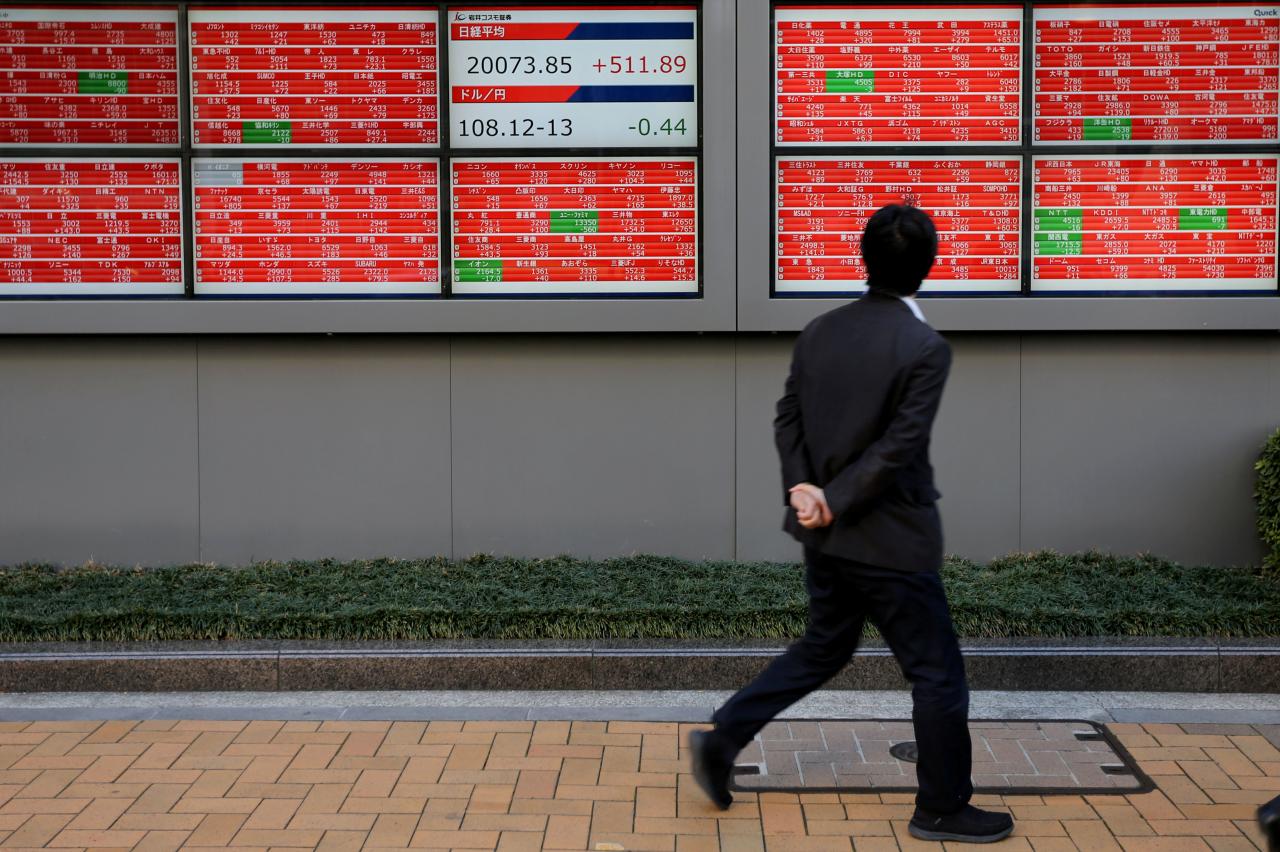 Asian shares propped up by hopes for Sino-US trade deal

TOKYO (Reuters) - Most Asian shares were propped up on Tuesday by hopes that Washington and Beijing may be inching towards a trade deal and that U.S. Federal Reserve would halt its tightening if economic growth slows further. Japan's Nikkei .N225 rose 0.9 percent while MSCI's broadest index of Asia-Pacific shares outside Japan .MIAPJ0000PUS ticked up just 0.1 percent, though it was dragged down by falls in China .CSI300 and Taiwan .TWII. On Wall Street, the S&P 500 .SPX gained 0.7 percent on Monday following 3.4 percent surge on Friday, with Amazon.com Inc (AMZN.O) and Netflix (NFLX.O) leading the rally.[.N] Gains in tech names allayed some fears, sparked by Apple’s sales warnings last week, that the high-flying sector is starting to be hurt by the Sino-U.S. trade war. “Market pessimism has been rolled back, partly helped by hopes as talks between China and the U.S. are underway. But many investors are still trying to play it safe and it is yet to be seen whether the recovery continues, or ends up as a short-term relief rally,” said Masanari Takada, cross-assets strategist at Nomura Securities. US Commerce Secretary Wilbur Ross predicted on Monday that Beijing and Washington could reach a trade deal that “we can live with” as dozens of officials from the world’s two largest economies resumed talks in a bid to end their trade dispute. China’s Foreign Ministry said Beijing had the “good faith” to work with the United States to resolve trade frictions, but many analysts doubt the two sides can reach a comprehensive agreement on all of the divisive issues before a March deadline. Investor also continued to buy battered stocks in response to strong U.S. job data on Friday and comments by Fed Chairman Jerome Powell that he was aware of the risks and would be patient and flexible in policy decisions this year. Powell’s comments have eased market concerns that the U.S. central bank might ignore signs of an economic slowdown and stick to its script of two rate hikes this year. “Various concerns markets had earlier are receding for now. Still, there’s no denying that U.S. earning momentum is slowing,” said Hirokazu Kabeya, chief global strategist at Daiwa Securities. “Ultimately we need to see whether upcoming earnings reports can dispel market concerns.” Analysts estimate S&P 500 companies will increase their fourth-quarter earnings per share by 15 percent from a year earlier, down from 20 percent growth seen three months ago, according to Refinitiv IBES data. The estimate for 2019 profit growth has fallen to about 6.9 percent from 10.2 percent. The picture is murkier for tech firms, whose earning growth estimates have fallen to 2.7 percent from 8.5 percent. “There have long been suspisions that U.S. tech companies might be overvalued. And in a way Apple game markets confirmationed,” said Kazushige Kaida, head of forex at State Street. “There are worries more tech companies may issue profit warnings, which means there will remain a pressure on US high-tech shares, and on the dollar/yen.” The dollar traded at 108.78 yen JPY=, struggling to extend gains after having recovered to its levels before its flash crash last week. The U.S. dollar is losing momentum as investors wind back expectations of rate hikes and a future widening in its yield advantage. But conditions in most other developed economies aren’t much to write home about, either, potentially limiting the upside for other major currencies. The euro slipped 0.2 percent to $1.1450 EUR=. The British pound dipped 0.1 percent to $1.2769 GBP=D4. British and European officials are discussing the possibility of extending Britain’s formal notice to withdraw from the European Union amid fears a Brexit deal will not be approved by March 29, The Daily Telegraph reported, citing unidentified sources. In contrast, the Canadian dollar hit one-month highs, having gained 2.7 percent in the past five days on gains in oil prices and on speculation the Bank of Canada will stick this week to its plan to raise interest rates to a neutral range. [CAD/] It last stood at 1.3284 per U.S. dollar CAD=D4. Emerging market currencies also benefited from a weak dollar, with MSCI emerging market currency index .MIEM00000CUS rising to levels last seen in late July. The 10-year U.S. Treasuries yield US10YT=RR bounced back to 2.698 percent, from Friday’s low of 2.543 percent, a trough last seen almost a year ago. Still, that is more than 50 basis points below its October peak of 3.261 percent. Fed funds rate futures <0#FF:> now price in a slim chance of a rate cut this year. Oil prices also rebounded further from 1-1/2-year lows reached in December, drawing support from a Wall Street Journal report that Saudi Arabia is planning to cut crude exports to around 7.1 million barrels per day (bpd) by the end of January. OPEC and its allies are trying to rein in a surge in global supply, driven mostly by the United States, where production surpassed 11 million bpd in 2018. Record high crude oil production has pushed up U.S. inventories. U.S. West Texas Intermediate (WTI) crude CLc1 futures rose 0.5 percent to $48.77 a barrel.