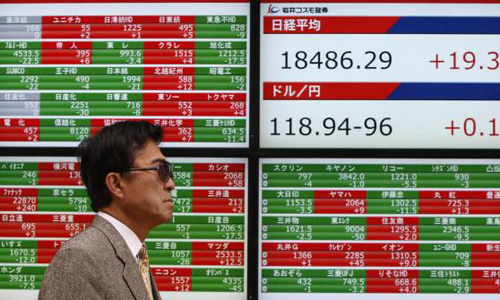 TOKYO (Reuters) - Asian stocks rose on Wednesday, taking their cues from Wall Street's gains after Federal Reserve Chair Janet Yellen suggested the Fed would not rush into raising interest rates. Shares extended gains after an index of Chinese factory activity eked out a rise to a four-month high in February, though export orders shrank at their fastest rate in 20 months. The flash HSBC/Markit Purchasing Managers' Index (PMI) inched up to 50.1, above the 50-point level that separates growth in activity from a contraction on a monthly basis. It beat consensus estimates for a reading of 49.5 even as China's manufacturers still faced considerable risks from weak foreign demand and deepening deflationary pressures. "Domestic economic activity is likely to remain sluggish and external demand looks uncertain," said Qu Hongbin, HSBC's chief economist in China. "We believe more policy easing is still warranted at the current stage to support growth." But combined with Yellen's overnight remarks, the PMI headline figure gave some solace to investors worried about a deteriorating global outlook. Yellen told the Senate Banking Committee that the US central bank was preparing to consider interest rate hikes "on a meeting-by-meeting basis." That was a subtle change of emphasis in how the Fed has been speaking about its plans, as it suggests a hike could still come as early as June but a later date for a rate increase is possible against the backdrop of weak US inflation and a sluggish global economy. MSCI's broadest index of Asia-Pacific shares outside Japan .MIAPJ0000PUS was up about 0.6 percent, while Japan's Nikkei stock average .N225 added 0.1 percent after closing at a fresh 15-year high in the previous session. US stocks closed higher on Tuesday, with the Dow Jones industrial average .DJI and the S&P 500 .SPX hitting records as many investors took the Fed's subtle change in emphasis to mean that higher rates were not on the immediate horizon. A backdrop of weakening global growth has also kept investors on the edge about the Fed's plans, with some worrying a premature start to the US rate hike cycle could dent momentum in the US economy even as Europe and China continue to struggle. The dovish interpretation was far from unanimous, however, and some left their rate-hike predictions intact. "In sum, we retain our view that the Fed will raise rates beginning in June, with risks to a later take-off should core inflation or measures of inflation expectations drift lower," strategists at Barclays wrote in a note to clients. US data on Tuesday painted a mixed picture. Home prices and the services sector supported the view of an ongoing US expansion, but a measure of consumer confidence fell. Because Yellen gave no sign of an imminent rate increase, investors piled back into US Treasuries, sending two-year yields to 2-1/2-week lows US2YT=RR and reducing the appeal of the dollar. The dollar initially rose to a two-week high of 119.84 yen JPY=EBS after Yellen's comments, before those gains unraveled. It was down about 0.2 percent in early Asian trading at 118.69 yen. News that euro zone partners had approved Greece's reform plan, a requirement for the cash-strapped nation to receive a four-month extension to its bailout, helped the euro rise off a Tuesday session low of $1.1288 EUR=EBS. It was up about 0.1 percent on the day at $1.1349, but edged down about 0.2 percent against the yen to 134.65 EURJPY=. Crude oil struggled to overcome pressure from expectations that this week's reports will show US crude inventories rose again, garnering support from news of a shutdown of Libyan oilfields. Brent LCOc1 added about 0.4 percent to $58.88 a barrel, though US crude CLc1 edged down about 0.1 percent to $49.25. Spot gold XAU= added about 0.8 percent on the day to $1,209.05 per ounce after it plumbed a seven-week low on Tuesday, before rebounding as the US dollar weakened after Yellen's testimony.