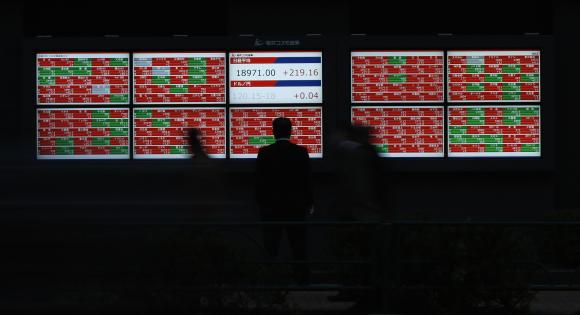 TOKYO - A surprise interest rate cut by South Korea's central bank on Thursday helped lift an index of Asian stocks away from the previous session's seven-week trough, while the euro plumbed a new 12-year low as the European Central Bank's easing pressured euro zonebond yields. Financial spreadbetters predicted some of Asia's luster would rub off in Europe, with Britain's FTSE 100 .FTSE seen opening 11 points higher, or up 0.2 percent; Germany's DAX.GDAXI expected to open 44 points higher, or up 0.4 percent; and France's CAC 40 .FCHIseen opening 7 points higher, or up 0.1 percent. "Despite a marginally weaker US session, European traders are shrugging it off and instead focusing on the bullish session in Asia," Jonathan Sudaria, a dealer at Capital Spreads, said in a note. The Bank of Korea's monetary policy committee cut its base rate KROCRT=ECI by 25 basis points to a record low of 1.75 percent, its first cut in five months. It joined its counterparts in other countries which have recently taken advantage of lower inflation to ease monetary policy to spur sluggish growth. The Bank of Thailand cut its policy interest rate on Wednesday, also a surprise step, andIndia has cut rates twice this year. China has eased policy twice, with more moves expected, while Singapore, Australia and Indonesia have also eased. MSCI's broadest index of Asia-Pacific shares outside Japan .MIAPJ0000PUS extended gains and was up 0.7 percent, moving away from Wednesday's seven-week lows. The Korea Composite Stock Price Index (KOSPI) .KS11 initially rose, but then fell 0.5 percent. A snap poll conducted by Reuters soon after the decision showed most analysts do not see another rate cut this year. Japan's Nikkei .N225 ended up 1.4 percent at a 15-year closing high, as traders positioned for Friday's settlement for Nikkei futures and options contracts expiring in March. "Foreign derivatives investors are seen chasing the market higher," said Norihiro Fujito, senior investment strategist at Mitsubishi UFJ Morgan Stanley Securities, who said investors with long positions in Nikkei futures would like to see futures settle at a higher price. EURO'S WOES CONTINUE The euro touched a fresh 12-year low of $1.0494 on Wednesday and was last at $1.0537EUR=, down about 0.1 percent on the day after the European Central Bank started to implement its 1 trillion euro bond-buying program this week. The common currency has fallen about 4.8 percent in the past five sessions - a pace of decline not seen even during the European debt crisis of 2011-12. By contrast, surprisingly strong US employment data published last Friday fueled expectations that the Federal Reserve may raise interest rates as soon as June, though some investors and analysts fear the economy is not yet ready for even marginally higher borrowing costs. The monetary policy divergence prompted many market players to shift funds to higher-yielding US dollar from euro. The dollar index .DXY =USD, which tracks the US currency against a basket of six major rivals, hit a high of 100.06 on Thursday, breaking the 100.000 figure for the first time since April 2003. It was last down about 0.1 percent at 99.672. The dollar edged down about 0.1 percent against the yen to 121.29 JPY= but remained not far from a nearly eight-year high of 122.04 yen hit on Tuesday. The dollar's strength undermined US shares on Wednesday, on concerns it would erode multinational companies' earnings. The S&P 500 Index .SPX fell 0.2 percent to a one-month low overnight. Another downside of the dollar's strength and the specter of higher US rates is that they risk unsettling the many emerging markets that have benefited from investors seeking higher yielding investments. Currencies such as the Turkish lira TRY= and the South African rand ZAR= have fallen almost as much as the euro so far this month. The Brazilian real fell about twice as much as the euro. "We should take note of the risk that emerging currencies could fall further. ... Some emerging countries are running current account deficits and their currencies falling would be negative for risk asset markets," Makoto Noji, senior strategist at SMBC Nikko said in report. US crude prices CLc1 rebounded after skidding to a one-month low overnight after government data showed a US oil inventory build last week, contrary to some expectations for a drawdown. It last stood at $48.42 a barrel, up about 0.5 percent on the day. The European benchmark Brent LCOc1 also touched a one-month low overnight, though it bounced back later on Wednesday and added 2 percent. It was extending that rally in Asia, up about 1.1 percent at $58.18 a barrel. –Reuters