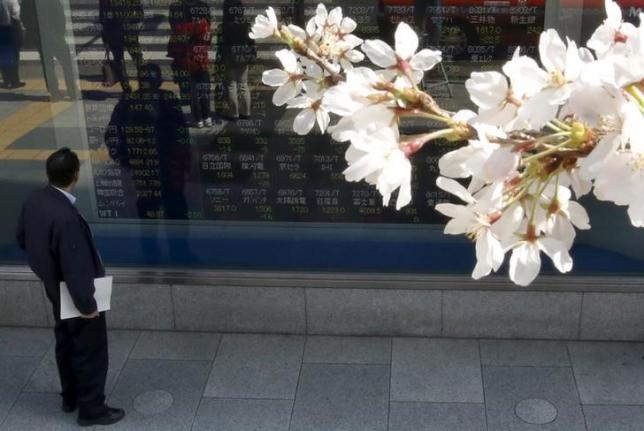 TOKYO - Asian shares gained while the dollar moved in familiar ranges in thin trading ahead of the Easter weekend, as investors awaited the release of key US employment figures later on Friday for clues on when the Federal Reserve will hike interest rates. MSCI's broadest index of Asia-Pacific shares outside Japan .MIAPJ0000PUS rose about 0.4 percent, while Japan's Nikkei stock average .N225 finished 0.6 percent higher. Wall Street logged modest gains ahead of the holiday after two losing sessions. Major European markets will be closed from Friday to Monday for the Easter holiday, reopening on Tuesday. Most US markets will be closed on Friday when the non-farm payrolls report will be released. It is expected to show an increase of 245,000 jobs in March, following a gain of 290,000 in February. Chinese shares .SSEC added 0.8 percent, shrugging off mixed HSBC/Markit ChinaServices Purchasing Managers' Index (PMI) figures. They showed the services sector expanded in March but growth in employment and new business fell to their lowest in at least eight months, in yet another sign that the weak Chinese economy may need more policy aid. "Chinese manufacturers and service providers both managed only modest increases in output at the end of the first quarter," said Annabel Fiddes, economist at Markit, adding that data "suggests that relatively weak client demand had dampened growth across both sectors". BRACING FOR PAYROLLS US data on Thursday showing an unexpected fall in the number of Americans filing new claims for unemployment benefits raised hopes for another strong labor reading, but not all strategists were convinced that the consensus expectation would be met. A weaker-than-expected jobs report would prompt investors to increase bets that the Fed might hold off on raising interest rates until late this year. "I believe that the market is positioned for a weak number, so the pain trade – the big shock to the market – would be a higher-than-expected figure," Marshall Gittler, head of global FX strategy at IronFX Global, said in a note to clients. Gittler said a disappointing number could trigger a bigger-than-usual move in euro/dollar, as most European market participants will be absent due to the holiday. Against the yen, the dollar was nearly flat on the day at 119.67 JPY=. The euro edged up about 0.1 percent to $1.0883 EUR=, after rallying more than 1 percent in the previous session as investors pared dollar-long positions ahead of the holiday weekend and the US jobs data. The common currency shrugged off minutes released on Thursday from the European Central Bank's March 5 meeting that showed monetary policymakers agreed to "remain firm" in implementing their quantitative easing program, even though the euro zone's economic outlook was improving. Brent oil LCOc1 fell nearly 4 percent on Thursday after a preliminary pact between Iranand global powers on Tehran's nuclear program, even as officials set further talks in June and analysts questioned when the OPEC member will be allowed to export more crude. Spot gold XAU= was slightly down at $1,200.80 an ounce, on track to end the week flat after a two-week climb. - Reuters