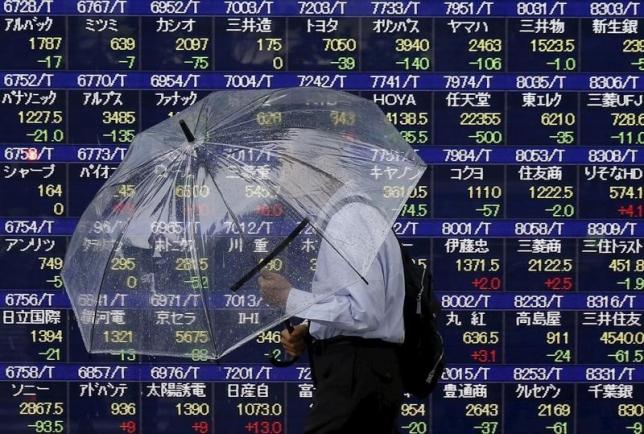 TOKYO - Fading expectations that the US Federal Reserve will raise interest rates this year and a bounce in oil and commodity prices helped lift Asian stocks to two-week highs on Tuesday. MSCI's broadest index of Asia-Pacific shares outside Japan rose 0.9 percent, touching its highest levels since Sept. 18. Japan's Nikkei rallied 1.5 percent, extending its rebound from an eight-month low hit a week ago. "One of the two big persistent concerns has faded, so investors are taking risks," said Masashi Oda, senior investment officer at Sumitomo Mitsui Trust Bank, referring to expectations of a near-term Fed hike. "Short-covering by those who had shorted stocks on those worries will likely support the market for a while." Japanese shares garnered further momentum from speculation that the Bank of Japan might expand its massive stimulus programme to support the flagging economy. Such speculation also bolstered the dollar against the yen. The BOJ began its two-day policy meeting on Tuesday, at which it is widely expected to hold monetary policy steady. But a surprise cannot be ruled out, and pressure is building on the central bank to act. At its next meeting on Oct. 30, the BOJ is expected to cut its long-term economic and price projections. Also underpinning sentiment, 12 Pacific Rim countries including the United States, Japan and Canada reached the most ambitious trade pact in a generation, though some analysts say the benefits of the far-reaching plan are far from clear at this point. "The market seem to be driven by speculation on policy steps, including uncertain benefits from the Trans-Pacific Partnership (TPP)," said Hitoshi Ishiyama, chief strategist at Sumitomo Mitsui Asset Management. Fed officials have said the central bank is likely to raise rates this year as the US economic recovery progresses, but surprisingly weak US jobs data on Friday led many investors to abandon expectations of a rate hike by the year-end. That boosted sentiment towards riskier assets, which have been long hit by threats of higher dollar borrowing costs as well as fears of a deeper slowdown in China. Wall Street rallied overnight, and MSCI's broadest gauge of world stocks rose 1.9 percent on Monday to its highest level in more than two weeks. US stock futures dipped 0.3 percent during the Asian day on Tuesday. Signs of a bounce in battered commodity prices helped soothe concerns of a global slowdown and lifted shares of energy and resource companies. Global crude benchmark Brent was up 0.2 percent on Tuesday at $49.33 a barrel after soaring 2.3 percent overnight, led by a rally in US gasoline and Russia's willingness to meet other major oil producers to discuss market conditions. Brent edged closer to the top end of its rough $46-$50 trading band in the past month. US crude was nearly flat at $46.25 after gaining 1.6 percent in the previous session. The dollar was mixed against major currencies as the headwinds from fading expectations for a Fed hike were countered by positive risk sentiment. The dollar index, which tracks the greenback against a basket of six major currencies, was flat at 96.107. The dollar traded at 120.51 yen, up about 0.1 percent, while the euro traded at $1.1174, down about 0.1 percent. The Reserve Bank of Australia (RBA) kept rates at a record low of 2 percent as widely expected, and said the country's currency is adjusting to lower commodity prices. After the decision, the Australian dollar erased light earlier losses and added about 0.2 percent to $.07101, moving back toward a two-week peak of $0.7112 on Monday. -Reuters