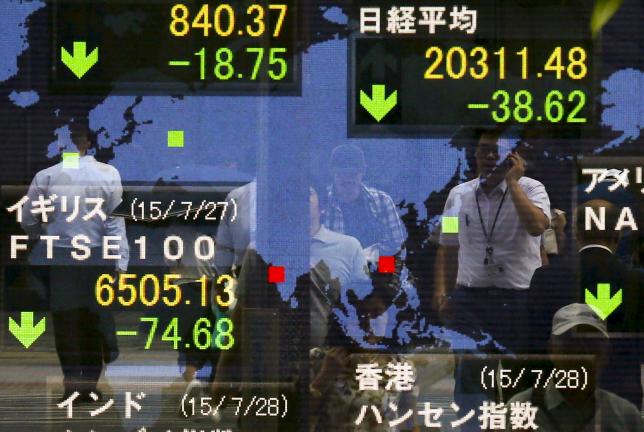 HONG KONG/TOKYO - Most Asian shares slipped on Friday, on track for a third consecutive weekly loss, and the dollar rose as caution mounted ahead of US jobs data that could spur the Federal Reserve to raise interest rates in September. Prospects of higher US rates have sucked funds out of emerging markets, with recent volatile moves in Chinese stocks and a rout in commodities also affecting investor demand. MSCI's broadest index of Asia-Pacific shares outside Japan .MIAPJ0000PUS was down 0.1 percent, down about 1.5 percent for the week, weighed down by weak US equities in the wake of disappointing earnings results. Japan's Nikkei stock index .N225 was up 0.2 percent, erasing earlier losses from investors taking profits after the Bank of Japan kept its stimulus programme unchanged. Investors had expected the BOJ to keep its policy unchanged. The central bank maintained its conviction that inflation will hit its 2 percent target without additional monetary stimulus. Upbeat US economic data and hawkish comments by a Fed official this week have supported the case for policy tightening and put pressure on emerging markets with Friday's payrolls data expected to play a crucial role in the Fed's decision. Economists expect the US employment report to show that 223,000 jobs were created in July. On Thursday, US jobless claims rose from the previous week, though the positive trend was intact. "Today's report on the US labour market is likely to be of even greater than usual interest because of the Fed's 'data dependent' approach to policy in what remains of 2015," strategists at Barclays said. An MSCI world index .dMIWO00000PUS has advanced 3 percent this year while the MSCI emerging markets index .dMIEF00000PUS has fallen more than 6.5 percent, as investors have switched their holdings. In currencies, the dollar index .DXY stood at 97.86, on track for a second straight weekly gain as investors focussed on the diverging policy divergence between the Fed and other major dovish central banks such as Japan and England. The dollar edged higher on the day at 124.78 yen JPY= after the BOJ policy announcements while the euro edged slightly higher to $1.0914 EUR=. Sterling was not far from overnight lows hit after the Bank of England sent a dovish message, with only one member voting for an immediate rate hike versus expectations for at least two members. The pound was flat at $1.5511 GBP=, after falling as low as $1.5465. In bond markets, US Treasuries were broadly stable as dealers squared positions before the economic data with benchmark 10-year notes US10YT=RR yielding 2.23 percent. Japanese 10-year bonds JP10YT=RR were trading on top of the day's ranges at 0.43 percent. In commodities trading, US crude futures edged up after dropping to multi-month lows overnight after a large drop in US crude inventories failed to boost prices. US crude CLc1 was up about 0.6 percent at $44.92 after skidding as low as $44.20 on Thursday, not far from the six-year low of $42.05 hit in March. Brent LCOc1 rose 0.6 percent to $49.81 a barrel, pulling away from Thursday's six-month low The 19-commodity Thomson Reuters/Core Commodity CRB Index .TRJCRB plumbed fresh lows not seen since 2003 with a year-to-date decline of nearly 14 percent. -Reuters