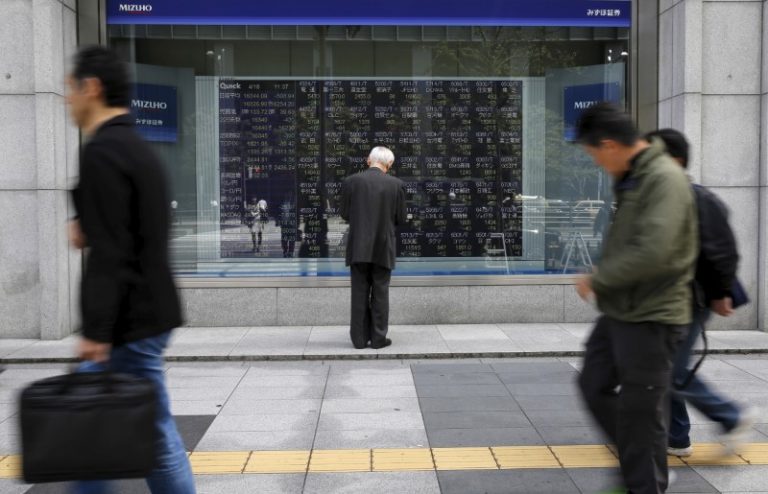 SYDNEY (Reuters) - Asian share markets weakened on Tuesday, taking cues from the rout in global technology shares while the yen edged higher ahead of the Bank of Japan’s rate review, at which it could flag a shift away from its massive monetary stimulus. Japan's Nikkei fell 0.5 percent. South Korea's Kospi index KS11 dipped 0.1 percent despite solid second-quarter results from Samsung Electronics  which posted a 5.7 percent rise in profit. MSCI’s broadest index of Asia-Pacific shares outside Japan .MIAPJ0000PUS was mostly unchanged at 543.23 as were Australian shares . Overnight in Wall Street, the Dow and the S&P 500 each lost 0.6 percent and the Nasdaq skidded 1.4 percent. The technology index .SPLRCT crumbled 1.8 percent overnight as disappointing results from Facebook , Twitter  and Netflix  spurred concerns about future growth for a sector that has led US equities to record highs “US equities took another leg lower overnight but sentiment towards risk looks more upbeat across other asset classes,” analysts at JP Morgan said in a note. “The BoJ decision today is the main focus,” they added. The yenclimbed 0.1 percent to 110.92 per dollar from a more than six month trough of 113.15 touched earlier in July. Speculation that the BoJ will dial back its easing also saw yields on Japanese Government Bonds tick up overnight. Other government bond yields edged higher too. Japan’s central bank will likely consider taking steps to make its massive stimulus programme more sustainable, such as allowing greater swings in interest rates and widening its stock-buying selection, according to sources.. “We would look to fade the recent yen rally ahead of the BoJ,” analysts at NAB said. “Looking further out, a BoJ that remains very accommodative for an extended period will challenge our expectations for yen to appreciate amid its fundamental cheap valuation and our expectations of a softer USD environment in 2019.” Elsewhere, most major currencies stuck to narrow trading ranges ahead of several central bank decisions. The US Federal Reserve concludes its policy meeting on Wednesday and the Bank of England is seen raising interest rates on Thursday. Month-end macroeconomic data is also due from China on Wednesday. The British pound held at $1.3132, drifting away from a more than 10-month trough of $1.2955 touched earlier in July. The euro was flat at $1.1707 after two consecutive sessions of gains. The dollar index .DXY, which measures the greenback against a basket of major currencies, was flat at 94.332. In commodities, US crude CLc1 eased 3 cents to $70.10 a barrel after a sharp rally overnight while Brent LCOc1 settled up 68 cents at $74.97. Spot gold was a tad firmer at $1,223 an ounce.