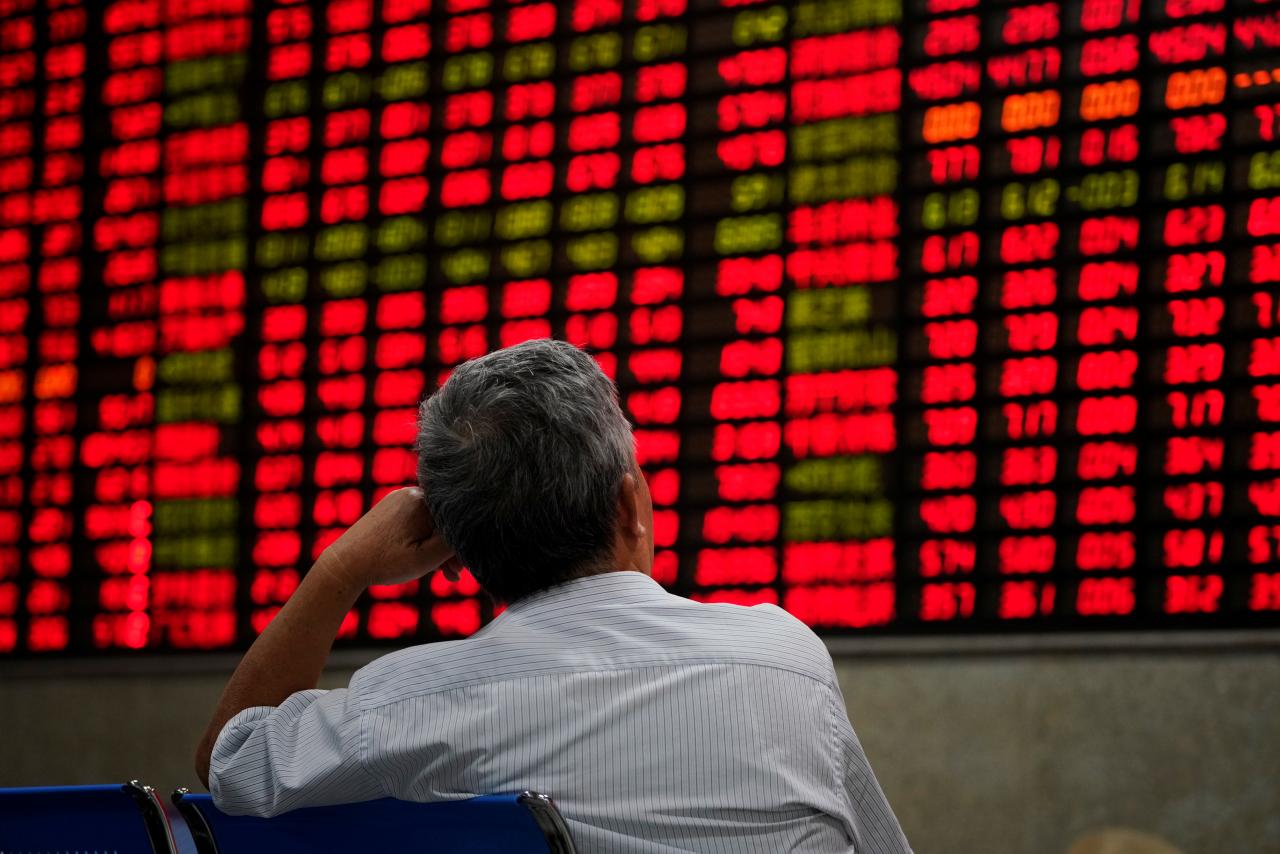 SYDNEY (Reuters) - Asian shares dithered on Wednesday and the dollar jumped to a near 1-1/2-year top as risk assets rowed back amid conflicting signals on prospects for de-escalating the Sino-US trade dispute. MSCI’s broadest index of Asia-Pacific shares outside Japan see-sawed between positive and negative territory and last was flat. Australian and South Korean stocks were both down 0.2 percent. Japan’s Nikkei gained 0.7 percent. Chinese indices shed small early gains. The blue-chip index was flat. Asian markets had slipped on Tuesday after U.S. President Donald Trump told the Wall Street Journal it was “highly unlikely” he would accept China’s request to hold off on a planned increase in tariffs to 25 percent from 10 percent. However, White House economic adviser Larry Kudlow sought to brighten the mood by confirming a dinner powwow between Trump and his Chinese counterpart Xi Jinping at an coming G20 gathering in Argentina. He also held open the possibility that the two countries would reach a trade deal. The news boosted Wall Street’s main indexes, which finished in positive territory after spending much of the session in the red. It was still unclear whether the two sides had agreed on a formal agenda for the leaders’ meeting after the G20 summit and Kudlow said there were no scheduled talks on the ground for their advisers. At the same time, a German magazine reported citing EU sources that Trump could impose tariffs on imported cars from next week, sending European auto stocks sharply lower. Also on Tuesday, a German magazine published a report citing European Union sources saying Trump could impose tariffs on imported cars from next week, which sent European auto stocks sharply lower. “The market mood has turned cautious once again amid a flurry of trade headlines pointing to the prospect of a new round of trade tariffs ahead,” said Rodrigo Catril, senior strategist at National Australia Bank. “The market seems to be jumping at shadows at the moment and against this backdrop of uncertainty the USD remains the preferred option for weathering the storm.” The dollar index, which measures the greenback against a basket of major currencies, jumped overnight to 97.497 to edge toward a 1-1/2 year top of 97.661 earlier this month. It was last at 97.412. Investors will now turn attention to a speech on Wednesday by Federal Reserve Chair Jerome Powell for further clues on how many more times the U.S. central bank is likely to raise interest rates. The event has become more critical as signs of a global slowdown and nearly two months of market volatility have clouded an otherwise rosy U.S. picture, prompting speculation the Fed will go slow on rate hikes next year. Traders will watch the speech in light of Trump’s criticism of Powell in a newspaper interview in which the president said interest rates and other Fed policies were damaging the US economy. Elsewhere in the foreign exchange market, the pound was among the worst performing major currencies overnight. It was last down 0.1 percent at $1.2733. British Prime Minister Theresa May will take her Brexit sales pitch to Scotland on Wednesday where she will likely face an uphill struggle to convince skeptical voters of the benefits of her deal for businesses. May needs to win a Dec. 11 parliamentary vote on her Brexit deal but that looks difficult with an apparent large majority of lawmakers - including the Scottish National Party with 35 of Scotland’s 59 seats in parliament - opposed to it. In commodity markets, oil was cautiously higher ahead of an OPEC meeting next week at which the producer club is expected to decide on some form of supply cut to counter an emerging glut. U.S. crude futures added 28 cents to $51.84 a barrel. Brent climbed 28 cents to $60.49. Despite a rise early Wednesday, oil prices have still fallen by almost one-third since early October, weighed down by the supply overhang and widespread weakness in financial markets.