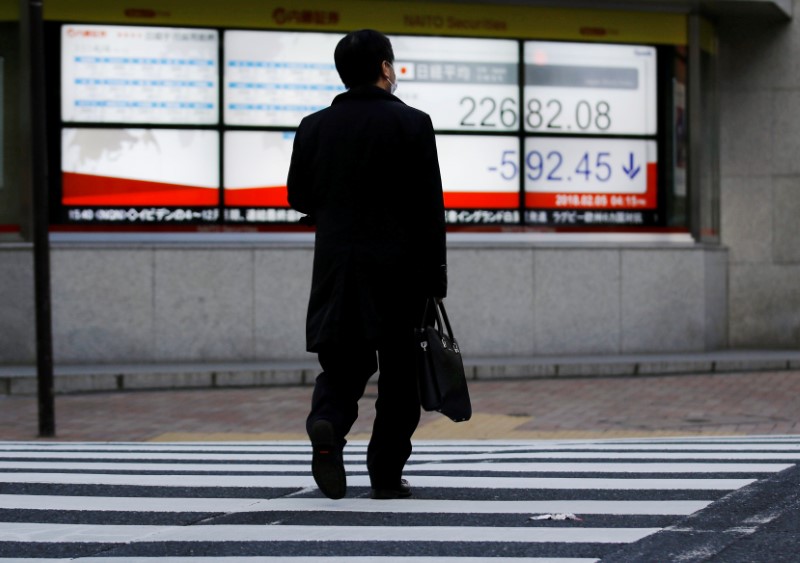 SYDNEY (Reuters) - Asian shares stepped back from a 2-1/2 month high on Friday as risk appetite soured on bets that Europe’s massive monetary stimulus was nearing an end, compounded by uncertainty over trade relations ahead of a key meeting of global leaders. MSCI’s broadest index of Asia-Pacific shares outside Japan .MIAPJ0000PUS fell 0.5 percent after six straight sessions of gains took it to the highest since mid-March. Chinese shares slipped, with the blue-chip Shangai-Shenzhen index down 0.6 percent. Hong Kong's Hang Seng  declined 0.7 percent while South Korea's KOSPI was off 0.4 percent. Japan's Nikkei  and Australian shares were barely changed. The European Central Bank will debate next week whether to end bond purchases later this year, the bank’s chief economist said on Wednesday, a hawkish message that sent the euro to a three-week top, hit emerging markets, and spurred demand for safe-haven bonds. “Markets are having to rediscover how to price risk amid reduced central bank buying and that adjustment could prove very hard,” said Matt King, Citi’s global head of credit strategy. Another major reason for the nerves was the widening rift between the United States and its major trade partners after President Donald Trump imposed import tariffs on steel and aluminium imports last week. Trump seemed in no mood to reconcile when he tweeted, just one day before a Group of Seven summit, that France and Canada imposed “massive tariffs” on their imports from the United States and had non-monetary barriers to trade. The summit takes place on Friday and Saturday in Charlevoix, Quebec. “Uncertainly ahead of the weekend’s G7 meeting led to a downturn in risk appetite throughout the US session,” said Nick Twidale, Sydney-based analyst at Racketing Securities Australia. “Risk trades were lower across the board in the currency markets as the yen and Swiss francs appreciated against the greenback and on the crosses. We saw more volatility in the emerging markets.” The S&P 500 and Nasdaq ended lower on Wednesday while Treasuries US10YT=RR gained. In emerging market currencies, the South African rand , Brazil's real  and the Mexican peso were the worst hit overnight.

Risk appetite also waned after US jobless claims pointed to a further tightening in labour market conditions, cementing expectations the Federal Reserve will raise benchmark US rates next week and twice again later in the year. Investors also looked to a historic US-Korea summit in Singapore on June 12 where the main issue is whether North Korea will abandon its nuclear weapons programme. The US dollar .DXY inched up a bit from near three-week lows against a basket of currencies, helped by the strong jobless numbers. The euro EUR=EBC paused at $1.1804 after four straight session of gains took it to the highest level since mid-May. The greenback also ticked up against the safe-haven Japanese yen to 109.79, but remained well below a four-month top of 111.39 touched in May. In commodities, copper came off from a 4-1/2-year high touched on Wednesday. [MET/L] Oil prices were boosted by worries over a steep drop in exports from crisis-plagued Venezuela, which faces the threat of US sanctions. US crude CLcv1 rose 13 cents to $66.08 a barrel, while Brent LCOcv1 added 1 cent to $77.33. Spot gold XAU= was steady at $1,296.40 an ounce.