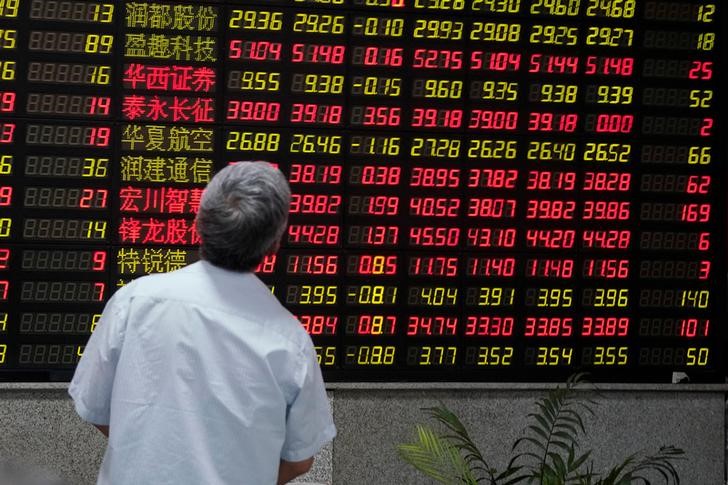 SHANGHAI (Reuters) - Asian stocks inched higher on Thursday as the United States and Europe agreed to negotiations to ease barriers on trade, but ongoing concerns about the outlook for global growth weighed on investor sentiment. A warning of slowing growth from Facebook Inc, which saw the company’s stock fall as much as 24 percent in after-hours trading , highlighted risks for investors and businesses in the current earnings season. Detroit automakers General Motors Co, Ford Motor Co and Fiat Chrysler Automobiles NV (FCA) also lowered their full-year profit forecasts , in an indication that trade war worries are far from over. Furthermore, nearly three-quarters of economists polled by Reuters said trade protectionism would have a significant downward impact on global growth next year. MSCI’s broadest index of Asia-Pacific shares outside Japan edged up 0.1 percent. After months of see-sawing prompted by uncertainty over trade, some markets were enjoying a relief rally, said Matt Simpson, senior market analyst at Faraday Research in Singapore. “Possibly we’ve got a bit of Trump fatigue,” he said, referring to Trump’s turnabout on trade threats. “You know, nobody cares if it’s going to happen or not at this stage. They just want a slight change of tone.” He added that ahead of US second-quarter GDP data on Friday and a likely shift in the Bank of Japan’s stimulus policy next week, investors were “in a bit of a holding pattern.” In China, the Shanghai Composite index fell 0.6 percent and blue-chip shares lost 0.9 percent. Concept stocks linked to Facebook were among the day’s losers. The prospect of weaker growth has prompted a loosening of fiscal policy in China as authorities seek to head off a slowdown. Most recently, China’s central bank gave notice to some domestic banks that it would ease a capital requirement to support lending. Shares in Taiwan gained 0.2 percent and Seoul’s KOSPI added 0.6 percent, with Korean investors taking heart from a respite in trade tensions. But data on Thursday showed South Korea’s gross domestic product grew at a slower pace in the second quarter, and export growth weakened. Australian shares were down 0.1 percent and Japan’s Nikkei stock index was 0.2 percent lower. After gains on Wall Street  sparked by signs of sunnier days for US-Europe trade, S&P 500 E-mini futures turned lower Thursday morning in Asia, falling 0.2 percent to 2834.75. In a news conference following a meeting between the two leaders , US President Donald Trump said he and European Commission President Jean-Claude Juncker had agreed to work to lower industrial tariffs on both sides. Juncker also called a “major concession” Trump’s agreement to hold off on car tariffs as the two sides launch negotiations to cut other trade barriers. At the same time, Trump said Europe has agreed to increase purchases of US liquefied natural gas and lower trade barriers to American soybeans. The most active soybean futures were up 2 percent at $8.93-1/4 a bushel, after touching their strongest level since July 9 at $8.95-1/4. US soybeans are among the goods China included in retaliatory tariffs after Washington slapped additional levies on $34 billion worth of Chinese goods on July 6. But while the transatlantic mood was improving, “this deal, along with the breakdown of a large M&A deal, leave investors fearing that the trade war has just turned even more so on China,” Citi analysts wrote in a note Thursday, referring to Qualcomm Inc dropping its $44 billion bid for NXP Semiconductors after failing to secure Chinese regulatory approval. US Treasury yields remained higher after the Juncker-Trump meeting. The yield on 10-year notes was at 2.9690 percent, compared with its US close of 2.936 percent . The two-year yield, which rises with traders’ expectations of higher Fed fund rates, hit 2.6694 percent compared with a US close of 2.657 percent. Earlier in the week, Treasury prices had slumped along with Japanese government bonds on speculation the Bank of Japan may soon start to taper its massive stimulus. The BOJ is said to be considering changing the composition of exchange-traded funds it buys as part of its stimulus program. It holds a two-day policy review on July 30-31. The dollar dropped 0.2 percent against the yen to 110.77 The euro was up less than 0.1 percent on the day at $1.1735, while the dollar index, which tracks the greenback against a basket of six major rivals, fell 0.2 percent to 94.141. US crude ticked up 0.1 percent at $69.39 a barrel. Brent crude was 0.6 percent higher at $74.39 per barrel. Gold moved slightly higher as the dollar eased. Spot gold was traded at $1,232.09 per ounce.