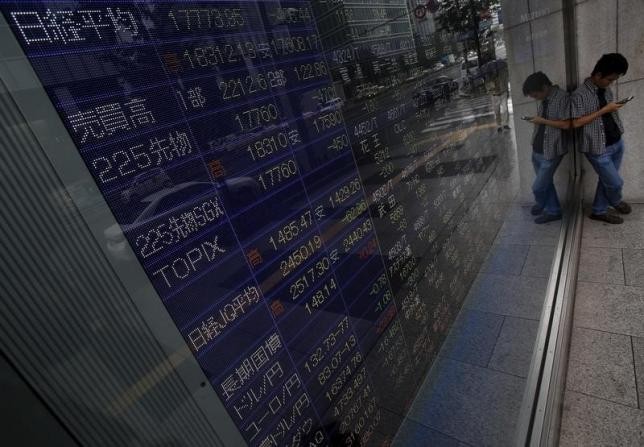 TOKYO (Reuters) - Asian shares fell on Thursday, weighed down by a plunge in high-flying technology shares, a move that some see as a healthy correction after a strong rally but others believe may herald the peak of a “super cycle” that has been boosting the sector.

In the US, the Nasdaq Composite dropped 1.27 percent as investors shifted to financials and other sectors even as the S&P 500 was almost flat and the Dow Jones Industrial Average gained 0.44 percent.

Shares of Amazon.com, Apple, Google parent Alphabet and Facebook fell between 2 percent and 4 percent. Among the year’s other high fliers, Netflix slid 5.5 percent.

Possibly weighing on them were concerns, sparked by a Morgan Stanley report earlier this week, that “super-cycle” in memory chip demand is likely to peak soon.

“It is true that if you look at the world’s semiconductor sales on chart, their year-on-year growth appears to be peaking out. Given the current high sales level, some market players would be naturally worried,” said Hiroshi Watanabe, economist at Sony Financial Holdings.

“But if you look at what’s driving demand, it’s not just smart phones and actually a lot of things, such as data centres. The world’s demand is likely to continue expanding in 2018 and I don’t see the need to be pessimistic now,” he said.

Some market players said selling in tech shares had more to do with profit-taking ahead of the end of the year. “Tech shares have done so well over the past year. There are many shares that saw their prices doubling. So investors have been on guard. They have been looking for an opportune time to sell,” said Norihiro Fujito, senior investment analyst at Morgan Stanley.

The Nasdaq index is still up 26.8 percent so far this year, more than 9 percentage points above gains in the S&P. The ex-Japan Asia-Pacific MSCI index is up more than 30 percent and is on course to log its 11th straight month of gains this month.

On the other hand, US bond yields rose across the maturities and the dollar gained some traction after the US third-quarter GDP growth was revised up to an annualised 3.3 percent, from the initial estimate of 3.0 percent.

That was the fastest growth in three years, though economists noted that inventories, goods yet to be sold, accounted for nearly a quarter of GDP growth.

The US Senate on Wednesday took a step towards passage of tax legislation that is a top White House priority, setting up a likely decisive vote later this week. But it remained unclear if the bill has enough Republican support to become law.

The 10-year US Treasuries yield rose to 2.389 percent, edging near this month’s high of 2.414 percent. There was no immediate market response after US President Donald Trump nominated Carnegie Mellon University professor Marvin Goodfriend, viewed as a policy hawk, to be a member of the Federal Reserve Board of Governors.

The dollar also firmed to 112.00 yen from Monday's ten-week low of 110.85 yen. The British pound hit a two-month high of $1.3480 after European Union diplomats said that Britain has moved "close" to EU demands over Brexit.

Among Asian currencies, the South Korean won stepped back from a 2-1/2-year high set the previous day after the country’s central bank raised interest rates for the first time in more than six years, which had been widely expected.

Oil traded cautiously ahead of the outcome of an OPEC meeting in Vienna later in the day, with members set to debate the path for an extension of the group’s supply-cut agreement.

While the Organization of Petroleum Exporting Countries and key non-member Russia look set to prolong oil supply cuts until the end of 2018, they have signalled that they may review the deal when they meet again in June if the market overheats. US crude futures traded at $57.41 per barrel in early Asian trade, up 0.2 percent, while Brent futures  rose 0.4 percent to $63.37 a barrel.