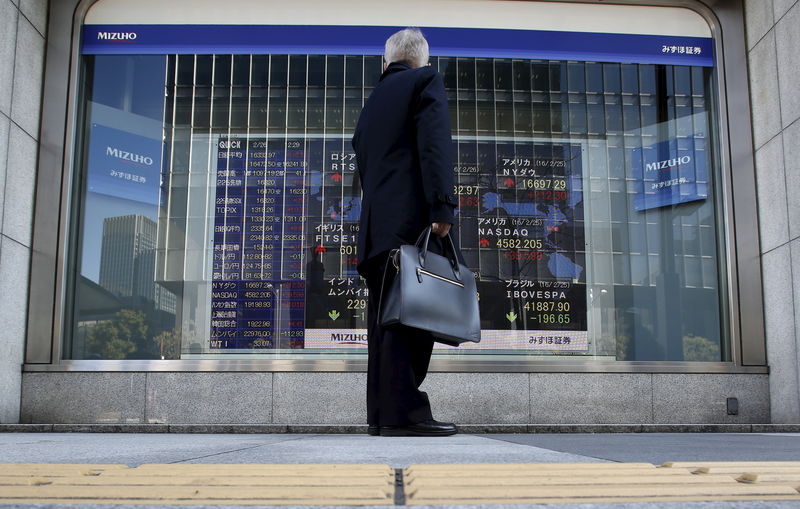 TOKYO (Reuters) - Asian shares came under pressure on Tuesday with Chinese markets and the yuan falling, hurt by fresh worries about the intensifying Sino-US trade war and tracking losses in Wall Street indexes. MSCI’s broadest index of Asia-Pacific shares outside Japan .MIAPJ0000PUS edged down 0.3 percent. The index has declined more than 12 percent this month and is on track for its biggest October decline since 2008, the year of the global financial crisis. Shanghai shares fell 0.6 percent in early trade while Japan's Nikkei average rose 0.7 percent, clawing back earlier losses in a volatile session. Major US indices fell steeply after a Bloomberg report that the United States is preparing to announce tariffs on all remaining Chinese imports by early December if talks next month between presidents Donald Trump and Xi Jinping falter. The CBOE Global Markets volatility index .VIX, known as Wall Street’s “fear gauge”, jumped to as much as 27.86 points, its highest since Oct. 11 and the second highest since the volatility shock of early February. “The probability of global stocks turning to a bear market is increasing,” said Masanari Takada, cross-assets strategist at Nomura Securities. “While some investors who look at fundamentals buy stocks on dips, there are other players who keep selling automatically in response to heightened volatility. Buyers will be overwhelmed if we have negative headlines on tariffs at time like this.” China’s yuan slipped further to near two-year lows in offshore trade after the central bank set its official yuan midpoint at the lowest fixing in more than a decade. In the onshore trade, the yuan slipped 0.1 percent to 6.9698 per dollar, hitting a 10-year low, stirring speculation over whether the central bank will tolerate a slide beyond the key level of 7 per dollar. The dollar index .DXY edged higher and was just below its 10-week high it hit on Friday. The index gained on a decline in the euro after news German Chancellor Angela Merkel would not seek re-election as head of her CDU party. Merkel said she would not seek re-election as party chairwoman, heralding the end of a 13-year era in which she has dominated European politics. Oil prices edged lower overnight after Russia signaled that output will remain high and as concern over the global economy fueled worries about demand for crude. The West Texas Intermediate crude futures CLc1 and Brent crude futures LCOc1 last traded at $66.87 and $76.92 a barrel, respectively.