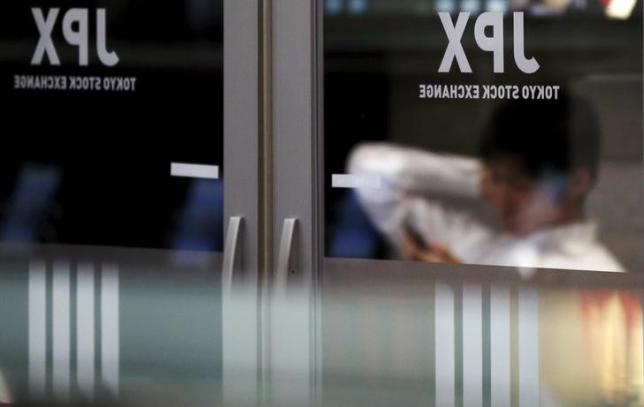 HONG KONG/TOKYO - Asian shares fell within sight of a fresh 1-1/2 year low while commodity currencies such as the Malaysian ringgit fell further on Monday after Chinese data highlighted a deepening slowdown in demand in the world's industrial powerhouse. News of another monthly decline in Chinese exports - its biggest fall in four months - and a collapse in producer prices shows how China's faltering industrial demand has hit global trade and sent emerging market assets reeling. MSCI's broadest index of Asia-Pacific shares outside Japan edged lower and held near a 1-1/2 year low hit last month. It has fallen 16 percent since May. "The markets are beginning to price in structurally lower growth in China and an end to the so-called commodity super-cycle," said Yoshinori Shigemi, global market strategist at JPMorgan Asset Management. While economists have long predicted a slowdown in the pace of China's economic expansion after years of turbocharged growth, investors have been taken aback by the scale of the slowdown and the impact it has had on emerging markets. In the six months to May, world trade volumes have shrunk by around 4 percent annualized, a pace of decline that hasn't been seen since the global recessions of 2001 and 2009, according to BNP Paribas economists. Much of that decline this year has been caused by a sustained slowdown in China. Emerging market equities have been among the hardest hit as companies struggle to deal with the China factor. Year to date, MSCI's Asia ex-Japan index is down nearly 7.5 percent in U.S. dollar terms compared to a flat performance from its U.S. counterpart, according to Thomson Reuters data. Though early days yet, corporate earnings in Asia have so far only confirmed that trend. Of the nearly 32 percent of the companies in MSCI Asia-ex Japan index reporting results so far, more than half have led to downgraded estimates for their earnings per share, according to Credit Suisse strategists. China's slowdown comes at a particularly sensitive time for emerging markets as expectations that the U.S. Federal Reserve will end nearly a decade of its zero interest rates soon have gained momentum in recent weeks, dealing a further blow to emerging market currencies and commodities. Malaysia's ringgit hit at a 17-year low as its foreign exchange reserves fell below the $100 billion mark while leveraged funds have increased their short bets on other commodity-linked currencies such as the Canadian dollar and the Australian dollar in recent days. Recent data have confirmed the economic recovery underway in the United States. The U.S. Department of Labor said on Friday employers added 215,000 jobs in July, only slightly below a Reuters poll while the unemployment rate held at a seven-year low of 5.3 percent, with signs that wages were beginning to pick up. On Wall Street the Dow Jones industrial average fell 0.3 percent, hitting a six-month low. The S&P 500 shed also about 0.3 percent. Prospects of higher U.S. interest rates have made the dollar more attractive to investors with the U.S. dollar index, which tracks the greenback's performance versus a basket of currencies, rising after the U.S. jobs data o 98.334, its highest since late April, before turning lower. On Monday, it stood at 97.670. The euro traded at $1.0957 while the yen was 124.35 to the dollar. Oil prices kept sliding on the global slowdown, a U.S. gasoline glut and a rise in the U.S. oil rig count. Crude futures prices fell to fresh multi-month lows early on Monday. Brent fell to $48.26 per barrel, not far from a six-year low of $45.19 hit in January. The 19-commodity Thomson Reuters/Core Commodity CRB Index plumbed fresh lows not seen since 2003 with a year-to-date decline of nearly 14 percent. - Reuters