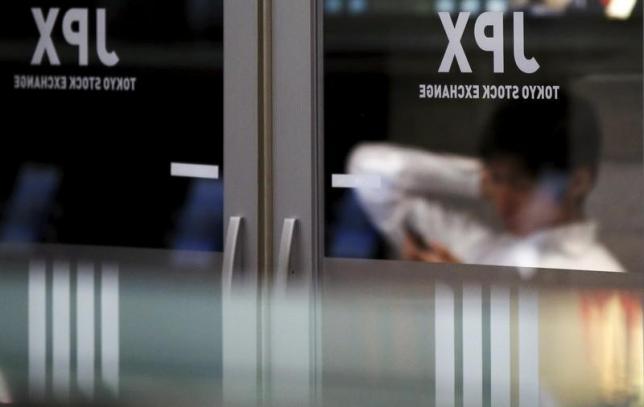 HONG KONG/TOKYO - An index of Asian shares outside Japan fell close to this year's lows on Monday thanks to a deepening selloff in commodities and fresh concerns over slowing growth in China, while the dollar held its ground against a basket of currencies. In line with weaker Asian stocks, financial spreadbetters expected a slightly lower open for Britain's FTSE, Germany's DAX and France's CAC. In a blow to risk sentiment, a private survey showed China's factory activity shrank more than initially estimated in July, contracting by the most in two years as new orders fell. "We believe the stock market panic in early July chilled economic activity, which is what the manufacturing PMIs picked up," ING economist Tim Condon said in a research note ahead of the Caixin PMI release. MSCI's broadest index of Asia-Pacific shares outside Japan fell more than 1 percent before paring losses to be down 0.9 percent. The biggest losers were financials and cyclicals. The index's low for this year was on July 8. Closely-watched Shanghai shares shed 1.9 percent. Japan's Nikkei slid 0.3 percent and South Korea's Kospi fell 1 percent. Australian stocks dropped 0.4 percent. "We believe the macro environment remains challenging for emerging market assets amid headwinds of low commodity prices, concerns over China and a looming Fed tightening cycle," Barclays strategists wrote in a daily note in clients. Recent flows data confirmed that trend. Net foreign selling from emerging Asia has reached nearly $10 billion over the past two months with only India seeing some tiny inflows. Although outflows have pummelled stock markets from Korea to Taiwan, valuations suggest more downside is likely. On Wall Street on Friday, the Dow lost 0.3 percent and the S&P 500 shed 0.2 percent, due to a drop in energy shares. In currencies, the dollar held broadly steady after sliding Friday on disappointing U.S. wage growth data. The greenback was firm at 123.97 yen. The euro was little changed at $1.1097. While recent dollar moves have been buffeted by U.S. economic data, the broader trend was seen staying on the upside after the Federal Reserve last week left the door open for a possible interest rate increase in September. The U.S. dollar has rallied 7.75 percent so far this year against the world's main trading currencies, after a 12.8 percent rise last year. And "the dollar's recent rally may just be getting started," according to research from the BlackRock Investment Institute. "Since the 1970s when the Bretton Woods fixed-currency regime ended and currencies began floating, a typical dollar rally has lasted roughly six to seven years," according to Russ Koesterich, BlackRock global investment strategist, who noted dollar rallies tend to be self-reinforcing, leading to greater inflows into U.S. assets in expectation of further dollar appreciation. That traditionally is also a headwind for emerging markets, which have an inverse relationship to the dollar. Commodities too were singing the emerging market blues. Crude oil continued to flounder after posting its biggest monthly drop since 2008 in July on China's stock market slump and signs that top Middle East producers were pumping out crude at record levels. U.S. crude was down 0.7 percent at $46.81 a barrel after losing 21 percent in July. Copper prices fell 10 percent in July, the worst month since January and are now at their lowest levels since June 2009. Overall the Reuters commodity index fell 10.8 percent in July, its biggest monthly fall since September 2011. Bonds were the sole bright spot. The benchmark U.S Treasury 10-year note yield held firm at 2.21 percent while 10-year Japanese bond yields stabilized at 0.41 percent, within reach of a two-month low. - Reuters