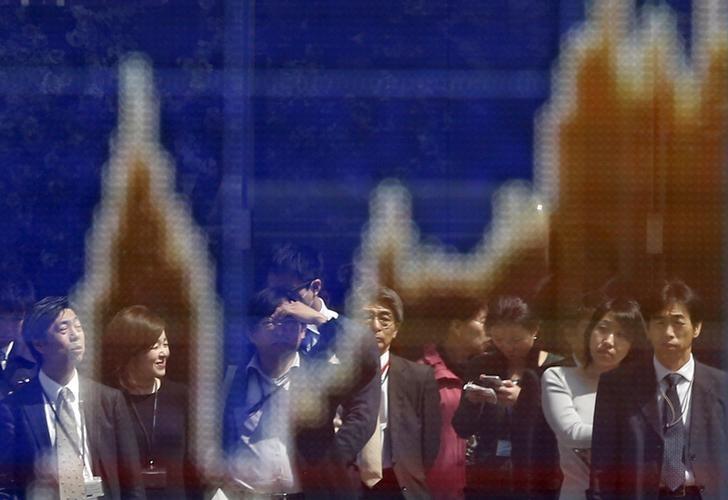 TOKYO - Asian stocks sagged on Wednesday, taking their lead from weaker US shares, while the dollar slid against the yen as Tokyo's Nikkei recoiled in volatile trade. Crude oil prices continued to decline as negotiations between Iran and world powers over nuclear technology with potential supply implications extended beyond a deadline. South Korean and Australian shares both lost 0.6 percent and Malaysian and Indonesian stocks were also lower. MSCI's broadest index of Asia-Pacific shares outside Japan stood little changed, meandering in and out of the red. Chinese shares, one of the region's best performers last quarter thanks to hopes for more monetary easing by Beijing, bucked the trend. The Shanghai Composite Index climbed a seven-year high with a soft Purchasing Managers' Index (PMI) reading the latest indicator to reinforce the case for more easing. Japan's Nikkei was down 0.9 percent after losing as much as 1.4 percent in volatile trade as investors sold recent gainers to lock in profits on the first day of the Japanese financial year. A soft Bank of Japan business sentiment survey also weighed on the Nikkei. S&P futures were down 0.6 percent after earlier shedding more than 1 percent. Though they registered a ninth straight quarterly advance, the S&P 500 and Nasdaq closed Tuesday lower as healthcare and energy shares retreated. The dollar fell to as low as 119.42 yen from an overnight high of 120.37. Many market participants, particularly foreign investors, sell the yen to hedge their equities positions, so the Japanese currency tends to gain whenever stocks drop. The euro was up 0.4 percent at $1.0773, pulling back from an 11-day low of $1.0713 as the dollar floundered. The Greek debt crisis weighed on the common currency again after Greece failed on Tuesday to reach an initial deal on reforms with its lenders, a precondition for financial help.Without a deal with the European Union and IMF, Athens faces the prospect of running out of money in a few weeks. "The ECB's 18-month quantitative easing program only began in March and to this day, Greece is a ticking time bomb for the Eurozone," Kathy Lien, Managing Director of FX Strategy for BK Asset Management, said in a note. "Even though a deal was reached with their creditors back in February, Greece could still be pushed out of the monetary union and this risk is weighing heavily on the currency." In commodities, US crude oil was down 0.5 percent at $47.34 a barrel after losing 2.2 percent on Tuesday. Talks between six world powers and Iran over Tehran's nuclear programme extended past a March 31 deadline as the parties edged towards a deal but failed to agree to crucial details such as the lifting of U.N. sanctions. The powers want Iran to accept restrictions on its nuclear programme in exchange for the lifting of export sanctions. A deal would in theory mean more crude from oil-rich Iran entering an already oversupplied market. Still, some suggested that lifting of sanctions may not automatically mean an immediate, visible increase in global supply. "Whether or not there is an Iranian nuclear deal, we do not expect a flood of oil into the market as a consequence," head of commodity markets strategy and oil strategy at BNP Paribas, Harry Tchilinguirian, told Reuters Global Oil Forum. "Which sanctions will be lifted and the uncertainty in the timing of lifting suggest that Iran will not be in position to significantly add to the current oversupply in the market," he said. - Reuters