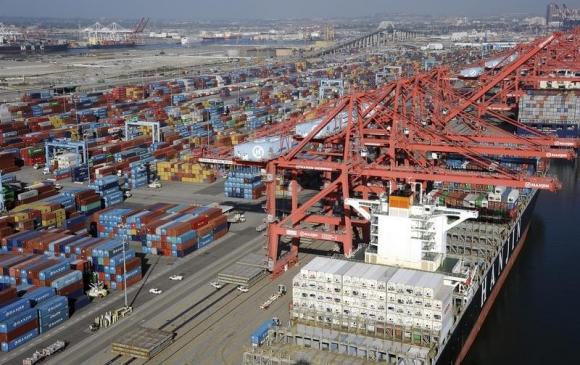 SAN FRANCISCO/TOKYO (Reuters) - A labor dispute at ports on the U.S. West Coast is disrupting supply chains across the Pacific, forcing some Asian suppliers to resort to costly air freight and pushing up shipping rates as more freighters are caught up in long queues to dock. With ports near gridlock and cargo delays being felt throughout the U.S. economy, President Barack Obama on Saturday dispatched Labor Secretary Tom Perez to California to try to broker an agreement on a new contract between dockworkers and the group representing shippers and terminal operators. Ports along the coast, which between them handle nearly half of all U.S. maritime trade and more than 70 percent of imports from Asia, have been experiencing severe delays since October, and the effects are rippling far beyond the United States. Japan's Honda Motor Co said on Sunday it would slow production for a week at plants in Ohio, Indiana and Ontario, Canada, as parts it ships from Asia have been held up by the dispute, affecting models including the Civic, CR-V and Accord. "We do not have a sufficient supply of several critical parts to keep the production lines running smoothly and efficiently," spokesman Mark Morrison said. Honda and other carmakers have already started transporting some crucial parts from Asia to their U.S. factories by plane. Fuji Heavy Industries Ltd, maker of Subaru cars, said it would continue flying parts to its U.S. factory beyond an initial arrangement through the end of February, which it previously said would cost an extra 7 billion yen ($59 million) a month. Toyota Motor Corp , which built about 2 million vehicles in North America last year, said it has reduced overtime at some factories as a result, while Nissan Motor Co Ltd said it had been slightly affected. With dozens of ships caught up in queues for miles along the West Coast, many waiting more than a week, the rates to charter container ships have begun to climb. "The strike is affecting a lot of vessels. There's a lot of delays, and this is pushing up panamax (container) rates as fewer ships are available for new orders," a leading Singapore-based broker said. A Shanghai index for U.S. West Coast (USWC) freight rates rose 23 points last week to 2,265 and brokers said quotes had risen a further five points on Monday. The dispute is also affecting volumes. Singapore-listed Neptune Orient Lines' container shipping unit reported an 8 percent decline in the fourth quarter, partly due to fewer trans-pacific sailings as a result of the congestion. Roberto Giannetta, secretary of the Hong Kong Liner Shipping Association, said the effects were being felt across the industry, as shippers looked for ways round the delays. "All shipping lines are affected, and all shipping lines are making alternative arrangements one way or another, by ... reallocating assets to the trans-pacific or redirecting cargo via the East Coast." Even if the dispute is resolved, there could be long-term consequences for the ports and the communities that depend on them. "Trust in West Coast ports is at an all-time low, and the perception of supply chain risk is at an all-time high," said Peter Tirschwell, chief maritime analyst at the JOC Group, a supplier of U.S. seaborne trade data. "We are entering another period of fundamental supply chain re-evaluation that is already leading some shippers to permanently abandon the West Coast." For air freighters, however, the crisis is an opportunity. Hong Kong carrier Cathay Pacific reported on Monday combined cargo and mail traffic figures for Cathay Pacific and Dragonair rose 12.5 percent in January, outpacing a 2.7 percent increase in passenger numbers, thanks to increased North American traffic. "We saw a pick-up in demand as January progressed, and by the end of the month we were operating close to a full freighter schedule," said its cargo sales and marketing manager Mark Sutch.