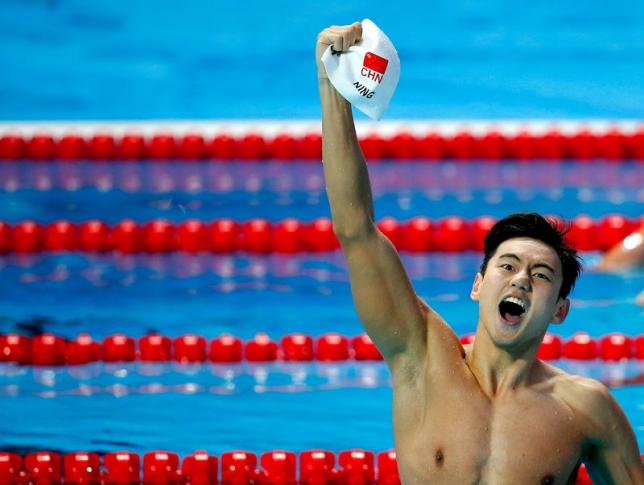 KAZAN, Russia – Ning Zetao's stunning 100 meters freestyle win at the world championships was an unexpected triumph for a swimmer determined to put a troubled past and the smear of a doping ban behind him. The 22-year-old from China's heartland province of Henan became the first Asian swimmer to win the blue riband event, roaring home to edge Australian favorite Cameron McEvoy and clock an impressive 47.85 seconds in the Kazan pool. "I didn't come here expecting any medal, not even dreamed of it," said Ning, who held his swimming cap aloft to show the red flag of China to the terraces. "When I touched the wall I didn’t think I could come first so it was huge to see it on the board." Ning's first world title came four years after he tested positive for clenbuterol, a stimulant that has put an array of high-profile athletes in hot water, including Tour de France-winning cyclist Alberto Contador and Mexican boxer Erik Morales. Many caught with it in their systems have claimed to have unwittingly ingested it from eating contaminated meat from animals fed the chemical to keep them lean. Then an up-and-coming teenager swimming for a provincial team affiliated with China's navy, Ning pleaded the same case but was banned for a year. "(The team's) conditions weren't especially good. I would often eat instant noodles at night," he said in comments published by Chinese magazine Life Week (www.lifeweek.com.cn) last month. "It wouldn't be good to just eat noodles alone. I was still growing, so I'd add some ham, some beef, salted duck egg to be kinder to myself. "I've said 10,000 times that this 'slip of the tongue' and my greediness was to be a life-long lesson." The clenbuterol issue is but one of a number of bitter pills Ning has had to swallow in his rise to the pinnacle of world swimming. He has long battled a stomach condition that saps him of strength and spent most of 2013 seeing specialists and trying different medicines to keep it under control. He was also born with a chronic bone condition in his right knee, which caused him to switch to freestyle earlier in his career after having first trained as a breast-stroke specialist. However, Ning's biggest torture was to wait out the year of his ban, and though he never betrayed his depression to team mates, he told a coach that he would often "shed tears in the water". His break-out moment came at China's 2013 National Games when he set Asian records in both the 50 and 100m freestyle. A year later he celebrated Asian Games gold at Incheon where he became the first swimmer from the continent to break the 48-second barrier in the 100m, while sweeping another three titles. Named the Best Male Athlete of 2014 by state broadcaster CCTV, Ning now has more than 1.5 million followers on his Weibo account, China's Twitter-like social media platform, and has joined Olympic and world 1,500m freestyle champion Sun Yang as a household name in his home country. With Russian swimming great Alexander Popov looking on, Ning gave a naval salute on the winner's podium as China's national anthem rang out over the pool. In a 2013 interview, Ning said Popov was his idol, for returning to the pool to win more titles after being stabbed in a dispute with Moscow street vendors shortly after the 1996 Atlanta Games. "He is a fighter and I need to learn from him," Ning said. –Reuters