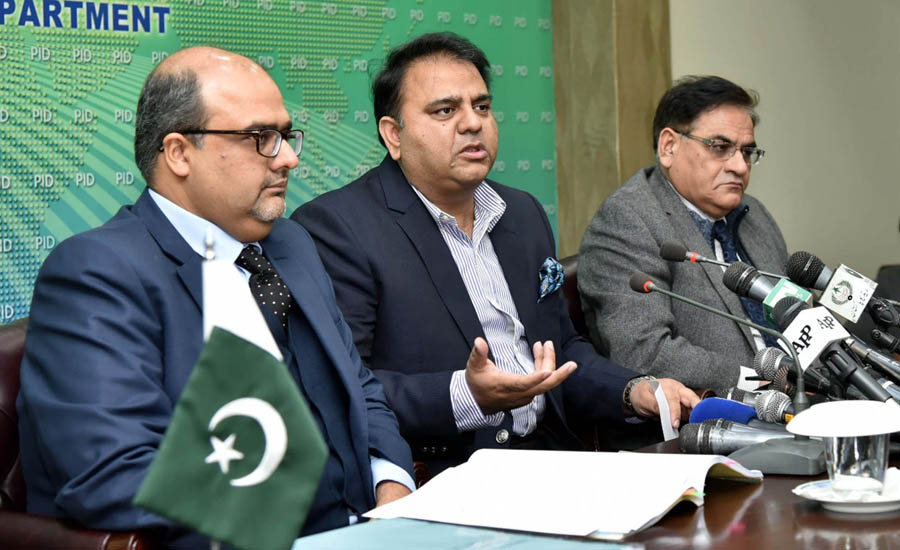 ISLAMABAD (92 News) – Federal Minister for Information Fawad Ch has claimed that PPP co-chairman Asif Zardari is the real owner of Omni Group and everything will clear in the NAB investigations. Addressing a joint news conference along with Special Assistant to Prime Minister on accountability Shehzad Akbar on Monday, Fawad said that the government will continue its drive against the corrupt mafia as per its manifesto to purge the country of the menace of corruption and money laundering. The minister said that mentioning of the Sindh chief minister in the nefarious corruption is shameful. “The film titled ‘Thug of Pakistan’ cannot be played without Murad Ali Shah,” he said. He announced the government will not desist from the demand for the resignation. “Ninety percent corrupt people are in jails,” he said. Fawad Hussain said that the conditions were worst than they expected. “We want to make the country an industrial base.” He also said the government is not interfering in the professional work of all the investigating agencies but has only given them a free hand to perform their obligations in an independent atmosphere. The minister said this policy has helped us to achieve some 90 per cent achievements in putting the corrupt elements behind the bars while the remaining ten percent would also be taken to task through a transparent accountability process. The information minister said the government will remove the names of PPP Chairman Bilawal Bhutto Zardari and Sindh Chief Minister Syed Murad Ali Shah from the ECL as per directions given by the Supreme Court while hearing the Fake Bank Accounts Case today. He said the Apex Court has referred the Fake Bank Accounts case to National Accountability Bureau for afresh investigation into the matter within two months. The minister said the government and all its institutions will extend all possible support to the NAB to take the matter to its logical end and bring back the plundered money to the national exchequer. On the occasion, Special Assistant on Accountability Shahzad Akbar said that how Omni Group formed so many companies from 2-4 companies. “Omni Group will have to answer about Zardari,” he said. He said that a questionnaire will be formed on each payment. “Common banks were acquired in Summit Bank,” he claimed. Shahzad Akbar said that the accused will have to answer to ‘benami’ properties at several forums. He said that the Supreme Court has not rejected the JIT report in the Fake Bank Accounts Case. He said all those who were issued notices in the case including Asif Ali Zardari, Faryal Talpur, Omni Group owners and Bahria Town’s Malik Riaz have failed to submit any substantial reply against allegations of corruption and money laundering to the Supreme Court in the light of JIT Report. Special Assistant to PM Shehzad Akbar said the top court has not exempted Bilawal Bhutto Zardari and Syed Murad Ali Shah from the NAB investigation into the case. He said the JIT report comprises of one hundred and thirty one pages and one thousand annexures and any accused who fails to satisfy the investigators will face references. He said all the accused will have to prove their innocence in matters relating to Summit Bank, Sindh Bank, Steel Mills and land grabbing. Shehzad Akbar said Asif Ali Zardari and the Omni Group owners will also have to reply as to what was the relation between them. Similarly, Asif Ali Zardari will also be answerable to explain the source of income about purchase of his properties in London and New York.