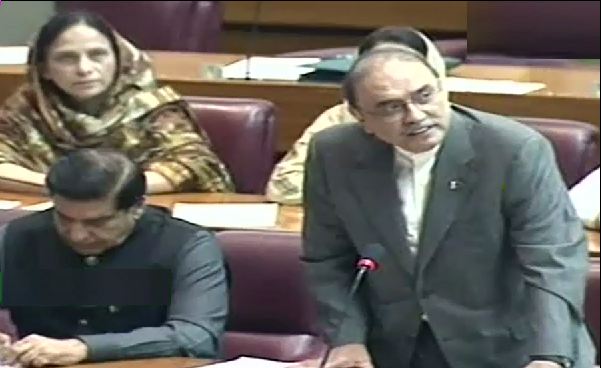 ISLAMABAD (92 News) – PPP co-chairman Asif Zardari has assured the government of support in all serious issues, including dams. Speaking in the National Assembly on Wednesday, he said that for how long they will continue to waste time through character assassination. He said that they had supported the Nawaz government and were ready to support the present government as well. “The government has received US$2-3 billion and the amount cannot fulfill the need for a long time,” he added. The former president said that democracy has several weaknesses, but it is the best treatment. “Time has come that we should sit together for the progress of the country,” he said. He claimed that he had floated the idea of the CPEC. “What will be in the project if we remove Gwadar from it?” he questioned. Asif Zardari said that the dams must be constructed, but steps should be taken for its conservation first. “Karachi has population of 30 million, which comprises of Bahari, Bangali and Khyber Pakhtunkhwa. Water is a basic issue,” he said. Meanwhile, Education Minister Shafqat Mahmood has welcomed the offer made by Asif Zardari.