Assad closer to Ghouta victory, as some rebels prepare to quit 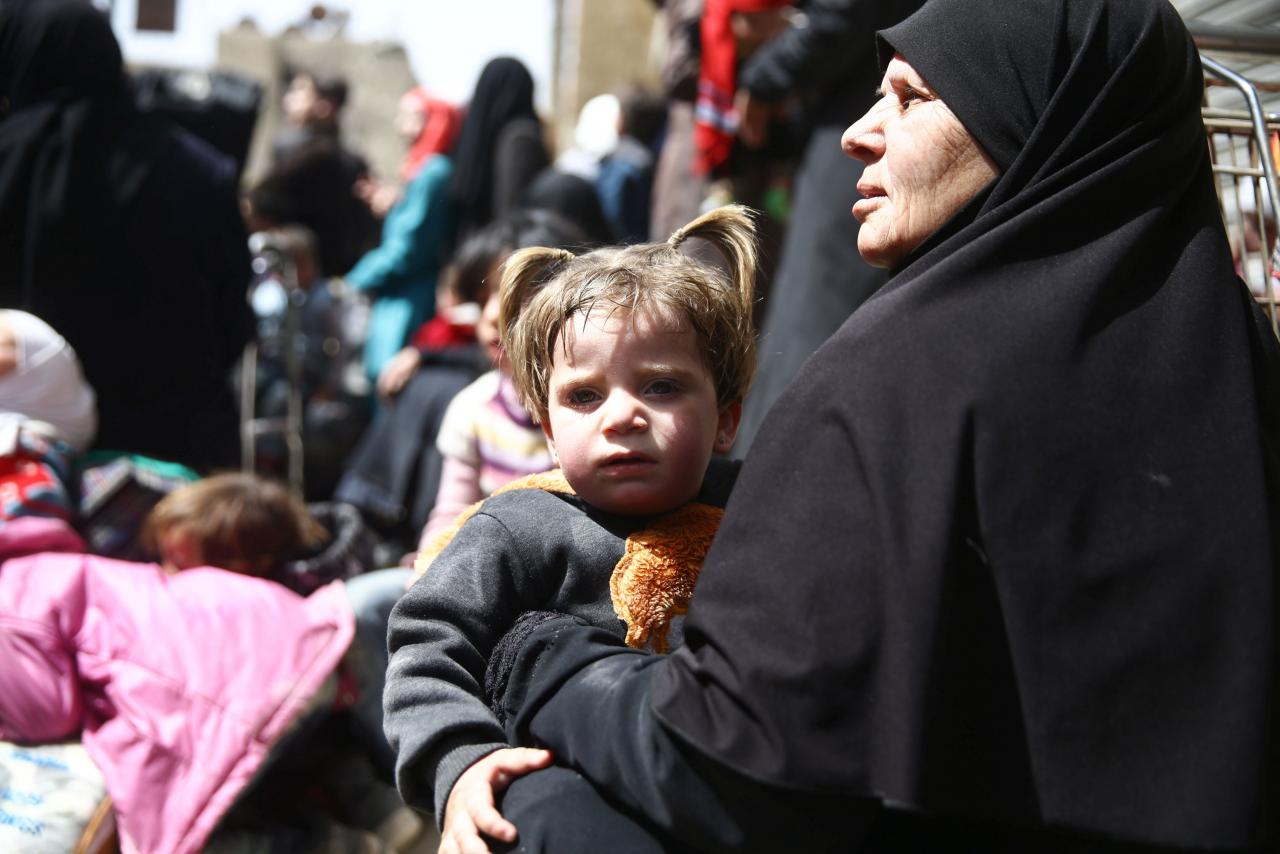 Assad closer to Ghouta victory, as some rebels prepare to quit

BEIRUT/DAMASCUS (Reuters) - The Syrian government moved closer to ending rebel resistance in eastern Ghouta as civilians streamed out of one of its besieged, bomb-battered towns on Thursday and insurgents prepared to surrender another.

The army assault on eastern Ghouta, an area of towns and farmland just outside Damascus, has been one of the most intense in Syria’s seven-year-old war, killing more than 1,500 people in a relentless bombardment with war planes, shells and rockets.

A Reuters witness said buses had driven into the town of Harasta and a Syrian military source said 600 to 700 fighters were expected to be among about 2,000 people leaving in them in the coming hours for opposition areas in northwestern Syria.

Hundreds of people including scores of fighters had already started boarding buses at an assembly point inside Harasta, the military source said. Between 18,000-20,000 people were expected to stay in Harasta under government rule, the source added.

Meanwhile, state television reported that more than 6,000 people had fled the larger rebel-held town of Douma since Wednesday, crossing over into government-held territory.

The Ahrar al-Sham group’s decision to surrender Harsata leaves only Douma and another rebel pocket in eastern Ghouta that includes the towns of Jobar, Ein Terma, Arbin and Zamalka.

They are all that remain of the main insurgent stronghold near the Syrian capital Damascus, the biggest prize for President Bashar al-Assad in his fight against the rebels since the recapture of Aleppo in late 2016.

Government air strikes had pummeled parts of eastern Ghouta on Thursday morning, striking Arbin and Zamalka and killing 19 people, according to the Syrian Observatory for Human Rights war monitoring group.

An army officer interviewed on state television urged rebels who had not yet negotiated a deal to quit. “Death is coming for you if you do not surrender,” he said.

On Sunday, Assad drove himself to a newly captured battlefront in eastern Ghouta, a demonstration of his seemingly unassailable position in the war that has been going his way since Russia sent its air force to help him in 2015.

The deal to surrender Harasta is the first by eastern Ghouta rebels and began on Thursday with a prisoner swap. In an interview with state television, a Syrian soldier freed by rebels wept and thanked God and the army for his release.

The Reuters witness at the crossing with Harasta said the army had removed barriers from the old frontline lying across the road into the town to allow the buses to pass.

The Russian Defence Ministry website showed what it said was live footage from the al-Wafideen crossing point from Douma into government areas. Over a period of several minutes, it showed dozens of people in small groups coming around a corner and trekking along the dirt road past armed soldiers.

Some bore bundles of their possessions, others carried small children or pushed prams. Behind were fields and trees. At one point in the road a man could be seen in a red shirt with the logo of the Syrian Arab Red Crescent.

Douma is the most populous area in eastern Ghouta, and for more than a week it has been entirely surrounded by the government. The Jaish al-Islam rebel group that holds the town has said it is determined to fight on after a month-long government offensive that has taken 70 percent of the former opposition enclave in eastern Ghouta.

However, the Observatory said people leaving the area were doing so under an agreement between the group and the government’s closest ally Russia.

The Syrian government and Russia have both accused rebels in eastern Ghouta of stopping civilians leaving the area. They say their assault, which the Observatory says has killed more than 1,500 people so far, is needed to end Islamist militant rule over the area’s people.

They also say it is needed to end rebel shelling of Damascus and other nearby areas. On Tuesday, a rocket struck a marketplace in a government-held town, killing dozens.

However, the ferocity of the Syrian army’s offensive in eastern Ghouta has prompted Western condemnation and urgent pleas from United Nations humanitarian agencies for a ceasefire.

Over the past week, tens of thousands of people have fled across the frontlines into government territory.

For the Harasta rebels, the journey to Idlib is one already well trodden by insurgents from other areas surrendered to Assad after prolonged sieges and intense bombardments of the kind used against eastern Ghouta over the past month.

The northwestern province is the biggest remaining area under rebel control in Syria and its population has been doubled by refugees fleeing other areas including many opposition supporters.

A military media unit run by Assad’s ally Hezbollah on Wednesday said some 1,500 fighters along with 6,000 family members would depart Harasta under the agreement with the government.

On Thursday the same Hezbollah media unit said the army and Ahrar al-Sham had started to exchange prisoners as the Harasta deal got under way.