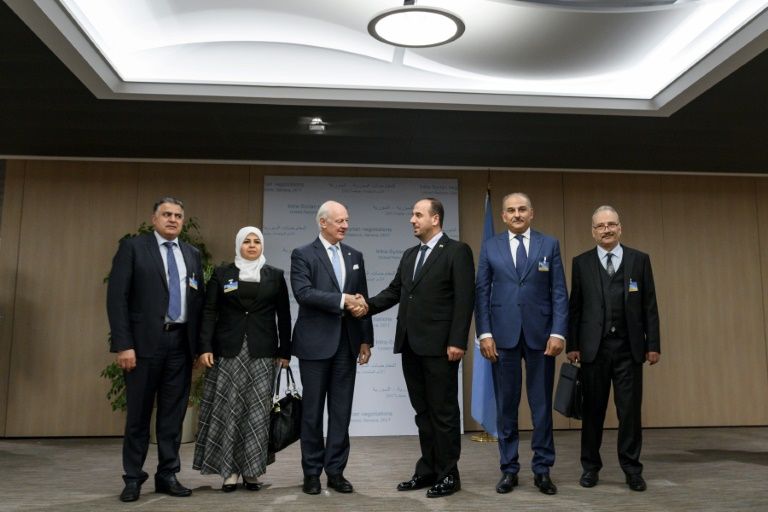 GENEVA (AFP) – Syrian government negotiators arrived in Geneva on Wednesday to join United Nations-backed peace talks to end the civil war, adamant that they will not tolerate any discussion of President Bashar al-Assad's ouster.

Damascus had initially refused to confirm it would attend the talks, which began on Tuesday, given the rebels were maintaining their hardline stance on the president's removal.

With the help of Russian military support, the Syrian regime has made major advances against its opponents in the past two years, seizing back large chunks of the country.

But a government delegation landed in the Swiss city on Wednesday, reportedly after securing key concessions from UN mediator Staffan de Mistura, including keeping the Assad issue off the table.

The talks have achieved little through seven previous rounds but there are hopes the latest may make some progress in ending what has been a devastating conflict.

Opposition representatives, united in one delegation for the first time, met de Mistura behind closed doors on Tuesday.

They told the envoy they remained ready for face-to-face talks with the government.

"We are one. We are ready to negotiate directly with the other side", opposition spokesman Yahya Aridi said in a statement.

De Mistura has said that he would push for direct talks once the opposition unified, but a source close to the government has told AFP that Damascus would not agree to sit around a table with rebel negotiators this round.

Rebel delegation chief Nasr al-Hariri had said that his camp was still insisting on Assad's removal as part of any peace deal, defying calls for moderation.

But sidelining the Assad issue may also suit de Mistura, who has said he wants this round to focus on a new constitution for Syria and UN-supervised elections.

De Mistura had voiced hope the coming round would mark the first "real negotiation" on a possible deal to end the six-year war which has claimed more than 340,000 lives, forced millions to flee their homes and left Syria in ruin.

He has also warned the opposition that intransigence on the Assad issue might no longer be tenable.

In September, he said the opposition needed to be "realistic" and accept that "they didn't win the war", a statement supported by facts on the ground.

With the help of Moscow, Assad's government has regained control of 55 percent of the country. The rest is carved up between rebel factions, jihadists and Kurdish forces.

The decision last week by Syrian opposition groups to send a single delegation to Geneva raised hopes of a possible breakthrough.

The new rebel negotiating team includes members of the Saudi-backed High Negotiations Committee (HNC), which insists on Assad's departure, as well as representatives of groups based in Moscow and Cairo that have a more moderate stance on the president.

Despite Hariri's firm public position on the Assad stalemate, a European diplomat said the situation was fluid.

"We expect (the opposition) will be pragmatic and flexible", the diplomat said, requesting anonymity.

A flexible opposition will likely help the UN's peace push, which has been overshadowed by negotiations spearheaded by Moscow.

Russia and its fellow ally Iran, along with rebel-backer Turkey, have hosted negotiations in the Kazakh capital of Astana that led to the creation of four "de-escalation zones" which produced a drop in violence, though deadly air strikes and battles continue in some areas.

Western powers are concerned that Russia is seeking to take a leading role in the peace process and will carve out a settlement that will largely favour Assad.

But experts and officials have noted that Moscow cannot forge a solution alone and needs the UN to legitimise any peace deal.