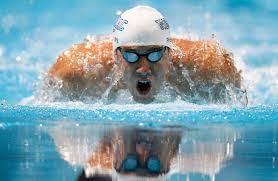 NEW YORK – Swimmers, especially endurance swimmers, are more likely than other water sport competitors to have asthma, according to a new study of Olympic athletes. Researchers found that about a quarter of competitors in swimming events had verified asthma, although it was more common among athletes from some parts of the world than others. The intensity of swimmer training, or long hours spent in the water, may expose swimmers to more chlorine byproducts compared to divers or other athletes who spend less time breathing just at the water’s surface, experts said. A long-term study would help distinguish “between athletes with asthma who self-select to swimming and those who have asthma as a result of exposure to endurance training practices,” said lead author Dr. Margo Mountjoy of McMaster University Waterloo campus in Ontario, Canada. Mountjoy is a practicing sports physician in aquatics and a member of a Therapeutic Use Exemption Committee for the International Olympic Committee and the World Anti-Doping Association. She and her coauthors studied objective evidence of asthma among all aquatic athletes who competed at the 2005, 2007 and 2009 FINA World Championships and the 2004 and 2008 Olympic Games in swimming, synchronized swimming, diving, water polo and open water swimming events. Athletes with asthma were required to show proof of airway obstruction with a clinical test in order to use their inhaled medications, which are otherwise prohibited during competition. Most years, swimming events had more participants with asthma or other airway obstruction than other aquatic events. At the 2008 Olympic Games, an exception, the synchronized swimmers and open water swimmers also had high asthma rates. Each year, between 12 and 25 percent of swimmers had asthma. In 2008, almost 25 percent of swimmers, 26 percent of open water swimmers and 22 percent of synchronized swimmers had asthma. In general, more athletes in endurance events like triathlon, pentathlon or cycling had asthma than those in nonendurance sports like fencing, volleyball or table tennis, the authors note. Asthma was more common in aquatic endurance sports, which included swimming, open water swimming and synchronized swimming, than in nonedurance events like diving, they write in the Journal of Allergy and Clinical Immunology. “I was not surprised to find that swimmers had a high prevalence of asthma,” Mountjoy told Reuters Health by email. “What was surprising for me to find was that there were significant differences between the endurance and non-endurance sports, as well as the distinct geographical distributions.” More athletes from Oceania, Europe and North America had asthma than those from Asia, Africa and South America, the authors found. “It was also interesting to find that although asthma is more prevalent in women than in men in the general population, this gender difference was not evident in the elite aquatic population,” Mountjoy said. Some postulate that the chlorine-derived chemicals in the air of aquatic training facilities may cause asthma, she said. “It is exposure to the chlorine and chlorinated compounds that is responsible for the changes in airway hyper responsiveness,” said Dr. Don McKenzie, who studies respiratory exercise physiology at the University of British Columbia in Vancouver. The more swimming you do, the more the risk increases, and elite athletes spend the most time with the chemicals, McKenzie, who was not involved in the new study, told Reuters Health by email. “If you swim in non-chlorinated pools, lakes, ocean etc. then the risk disappears,” he said. Alfred Bernard of the Catholic University of Louvain in Brussels, Belgium, agrees the chlorine-based oxidants building up at the surface of pools that the elite swimmers actively inhale penetrate deeply in the lungs and probably cause asthma. Divers and water polo players may hyperventilate less than elite endurance swimmers, breathe more through the nose and do not continuously inhale the chlorine-laden air just above the water’s surface, which may explain the decreased prevalence of asthma, Bernard told Reuters Health by email. Historically, asthmatic children may have been encouraged to practice swimming and may go on to other aquatic disciplines, Mountjoy said. “Swimmers should be aware that if they have a chronic cough, shortness of breath, or wheezing, they should seek medical attention for appropriate testing and treatment,” she said. “They should also ensure that their training environment has appropriate ventilation with respect to air quality.” Asthmatic swimmers were no more or less likely to earn medals than other athletes, Mountjoy noted, which means it may not affect performance if properly treated. “The health benefits of swimming are numerous and the risk of developing asthma at the elite level does not negate these other important health benefits,” she concluded. - Reuters