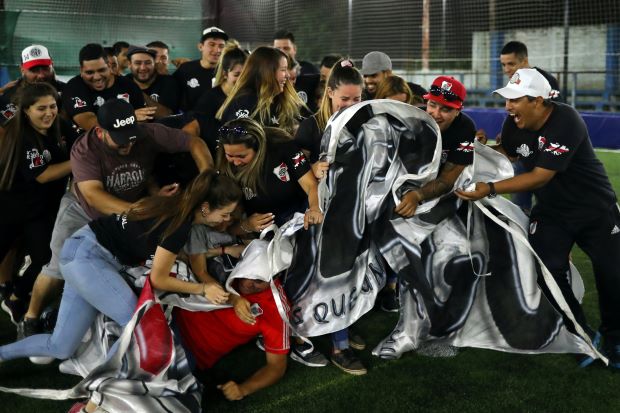 SAO PAULO/BUENOS AIRES (Reuters) - They call it the greatest rivalry in football and the people who watch it the greatest fans in the world. And this weekend, they are calling the meeting of Argentina’s Boca Juniors and River Plate the greatest final ever.
While Europe has the Champions League with money, glamour, and organisation, the Copa Libertadores played in South America is all about grit, passion and unpredictability. Saturday’s match between Argentina’s two biggest clubs - known as the Superclasico - is almost as much about the fans as the players. The threat of chaos, both on and off the field, is omnipresent. The two teams drew the first leg 2-2 at Boca’s hallowed Bombonera ground in Buenos Aires on Nov. 11. The decisive second leg takes place this Saturday at River Plate’s Monumental stadium on the other side of town. For the most passionate of followings, it is all or nothing. “This is a very important match, we cannot lose,” said Vicente Zucala, a 29-year old blind fan of River Plate. “If we lose, we’re done, it will all be over.” Boca have won the Libertadores six times and River have won it three, but this is the first time in the competition’s 58-year they have met in the final. Both matches were sold out, with people coming from all over the world just to soak up the atmosphere. “River Plate for me is my life, my passion,” said Byron Stuardo Alquijay, a 33-year old who came from Guatemala. “I had to sell my car to come here. I might buy another car in the future but this match will never be repeated.” Unlike in the past, when rival fans could occupy either end of the stadium praying for a chance to taunt their opponents, only home fans have tickets for the final’s two matches. Away fans have been banned from Argentine derby matches because of recurring trouble between competing sets of barras bravas, the name given to the organised fan groups who roar their support from the terraces. “The Superclasico between Boca and River is so important because the fans are so passionate,” said Cayetano Milon, a 51-year old Boca fan who runs a shop next to the Bombonera. That rawness is what appeals to many old-school fans and what makes the Libertadores so different from the Champions League and European football in general.

On the field it is unpredictable - 18 different sides have made it to the last 10 Libertadores finals, compared to just 10 in the Champions League. Off the field, there is a different level of commitment, even for those used to Kop at Liverpool, the Yellow Wall at Borussia Dortmund, or fireworks and fervour in the Balkans. Grounds such as La Bombonera are steeped in history, even though many are ramshackle and run down and often lacking proper seats, proper cover and even proper toilets. Many of the stadiums are part of the community and remain in the same place they were built decades ago, still hemmed in by houses and shops. The fans are separated from the players by moats, running tracks or chain-link fences. Sometimes the corners are fitted with perspex to stop drinks and bodily fluids raining down on opposition players. In the Libertadores, pitches are not always pristine, tackles from behind are common, and it is normal to see the matches end with officials surrounded by riot police, their shields protecting them from fans and players. The South American Football Confederation wants to make the competition more like the Champions League - a tough task given their prize money is only one-tenth of their European counterparts. One of the big changes is to end the home-and-away format for the final and make it a one-off event in a neutral venue. The change will take effect next year and has infuriated fans who say the distances and costs involved will rob ordinary supporters of the chance to see their team in the biggest match of the season, and perhaps of their lives. It also means this Boca-River showdown is the last of its kind. This weekend therefore carries a special poignancy for fans of both teams. “Personally, I don’t like the River-Boca matches,” said River fan Maria Fe Diaz, whose father once had a heart attack during a derby match. “They are too stressful for me. I didn’t want this match to happen. I don’t know how I’m going to make it until Saturday.”