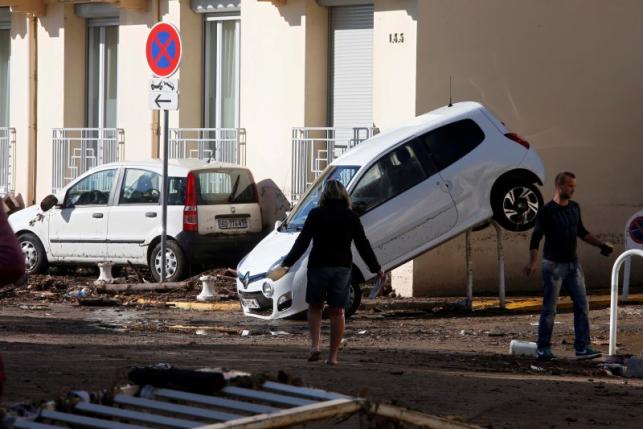 NICE - Flash floods caused by torrential rain along part of the French Riviera killed at least 13 people and left several others missing, officials said Sunday. The downpour hit the Alpes-Maritimes region on Saturday evening, with the resort town of Cannes, registering close to 180 millimetres (7.1 inches) of rain in three hours at the height of the stormy weather, the interior ministry said. President Francois Hollande was due to visit the region, which lies at the eastern end of France's Mediterranean coast and borders Italy, later on Sunday. The victims included three people killed at a retirement home that was flooded in Biot and a person who died at a campsite in Antibes, local officials said, adding that six people were still reported missing. In Cannes, home to the prestigious annual film festival, the train station was flooded, leading to the interruption of local rail services, while cars were swept along streets by torrents. In Nice, flights were briefly diverted away from city's airport on Saturday evening and some passengers remained held up there on Sunday morning, officials said. A soccer match between the town's team and Nantes for the French first division was abandoned midway due to the rain, while hundreds of people were stranded overnight at a concert venue after attending a show by French rock legend Johnny Hallyday. The flooding cut off a local stretch of the A8 motorway overnight and left thousands of homes without electricity. -Reuters