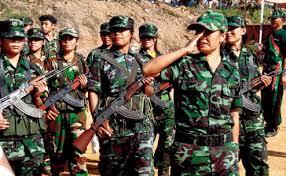 (Reuters) - Heavy fighting between Myanmar soldiers and ethnic insurgents this week has killed at least 20 people near the northeastern border with China, the government and an organization representing the rebel groups said on Thursday. Various rebels groups have fought the central government in Myanmar since independence in 1948. While the government has struck ceasefires with almost all of the factions, clashes often flare up. Myanmar's Information Ministry said on its Facebook page that nine soldiers and 11 rebels were killed in a series of clashes from Monday in northern Shan and Kachin states. The United Nationalities Federal Council (UNFC), which represents 11 ethnic rebel groups, confirmed the fighting in both states, but said that around 30 government soldiers had been killed and about four rebels had died. The latest fighting broke out after the UNFC sent a letter to President Thein Sein asking the government to sign an agreement to work towards a federal union. Khu Oo Reh, the UNFC general secretary, said an agreement to create a federal union would pave the way to signing a national ceasefire, but recent fighting could undermine such efforts. “It could delay or it could derail the process,” he said. “That is our concern.” The UNFC hopes to sign the federalism agreement on Feb. 12, which marks the day in 1947 that the national army and ethnic leaders agreed to create a federation upon independence from Britain. While most ethnic rebel groups have individual ceasefires with the government, this week's fighting involved the Ta-ang National Liberation Army and the Kachin Independence Army. Neither have signed ceasefire agreements. Khu Oo Reh said the army might have launched attacks against the insurgents to pressure them into accepting a ceasefire proposal. Myanmar’s reformist semi-civilian government, which took power after 49 years of military rule, has said it wants to sign a national ceasefire agreement before elections later this year. But federalism has emerged as a sticking point in negotiations, because rebel groups want greater autonomy, while the military has long stressed the need for a strong, centralized government, as set down in a 2008 military-drafted constitution.