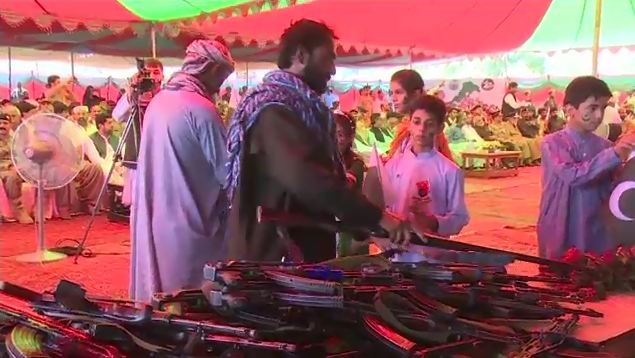 QUETTA (92 News) – At least four hundred Baloch rebel Commanders of different organizations including banned Baloch Liberation Army and Baloch Liberation Tigers have surrendered in a ceremony held in connection with the Independence Day on Friday. Chief Minister Baluchistan Dr Abdul Malik Baloch, Commander Southern Command, Lieutenant General Nasir Janjua, Inspector General of Frontier Corps Major General Sher Afghan and other civil and military officials participated in a ceremony held at the Police Lines in this regard. The commanders of the banned outfits have handed over their weapons to the Pakistan Army. Addressing the ceremony, Commander Southern Command, Lieutenant General Nasir Janjua said that none of the religion gives permission to terrorism, adding that they welcome the surrender of the rebels. He said that the sacrifices of the armed forces cannot be forgotten. On the other hand, the rebel commanders demanded apology and they vowed that they would never fight against the state. “We will remain peaceful and loyal to Pakistan and will live rest of the life as a Pakistani national,” they said.