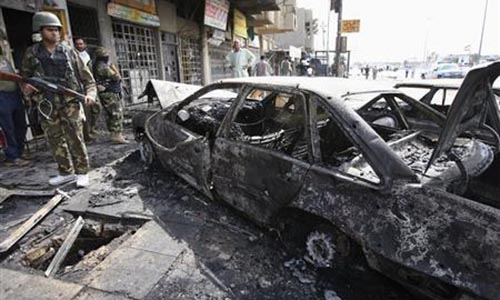 BAGHDAD – At least 71 people were killed and nearly 150 injured in two bomb attacks on Monday in eastern Iraq, security and medical sources said, underscoring a continued threat from Islamic State militants in a province previously considered freed of them. In January Iraqi officials declared victory over the radical jihadist group in Diyala province, which borders Iran, after security forces and Shi'ite paramilitaries drove them out of towns and villages there, but the militants have remained active. At least 40 people were killed and 72 others wounded when a car bomb exploded in a marketplace north of the city of Baquba, the sources said. A separate blast to the east of the city killed a further 31 people and wounded 75. There was no immediate claim of responsibility for the attacks, but they came less than a month after a bombing claimed by Islamic State in the nearby town of Khan Bani Saad, which left more than 100 people dead. Pro-government forces are struggling to uproot Islamic State from large swathes of territory in northern and western Iraq which the group seized in a sweep across the Syrian border last summer. –Reuters