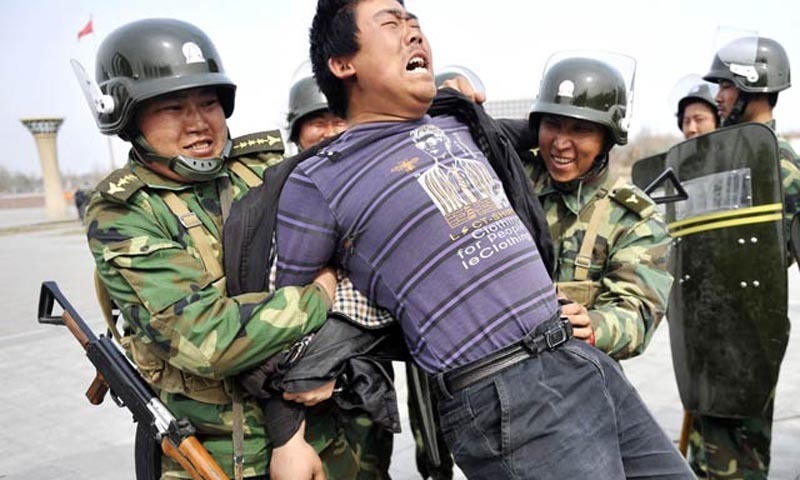 BEIJING - At least 50 people died in an attack last month at a coal mine in China's far-western Xinjiang, Radio Free Asia reported on Thursday, as a visiting senior leader warned that the security situation in the violence-prone region was "very serious". The government says it faces a serious threat from Islamist militants and separatists in energy-rich Xinjiang, on the border of central Asia, where hundreds have died in violence in recent years. But exiles and rights groups say China has never presented convincing evidence of the existence of a cohesive militant group fighting the government, and that much of the unrest can be traced back to frustration at controls over the culture and religion of the Uighur people who live in Xinjiang, a charge Beijing denies. U.S.-based Radio Free Asia said the number of people killed in the Sept. 18 attack at the Sogan colliery in Aksu had reached 50, with most casualties members of the Han Chinese majority and police blaming knife-wielding separatists. The news came as the country marked 60 years since the establishment of what it calls the Xinjiang Autonomous Region, complete with images on state television of happy ethnic minorities dressed in colourful outfits dancing in celebration. Radio Free Asia, citing its own sources, said that when police officers arrived at the mine, attackers "rammed their vehicles using trucks loaded down with coal". "Nearly all the workers who were not on shift at the time were killed or injured," police officer Ekber Hashim told the station. "Some workers were sleeping while others were preparing to work when the attackers raided the building after killing the security guards." Reuters was unable to reach officials for comment. Such incidents are frequently reported in overseas media but not confirmed by the Chinese government until days later, if ever. Yu Zhengsheng, in charge of religious groups and ethnic minorities and No.4 in the ruling Communist Party, told officials at an event marking the 60th anniversary in the regional capital, Urumqi, not to rest on their laurels. "We must fully recognise that Xinjiang faces a very serious situation in maintaining long-term social stability, and we must make a serious crackdown on violent terror activities a focal point of our struggle," Yu said, in a speech carried live on state television. -Reuters