At UN, Castro says US must end embargo to have normal Cuba ties 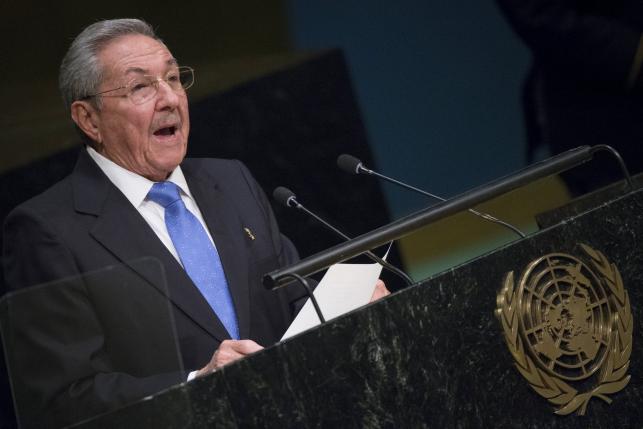 At UN, Castro says US must end embargo to have normal Cuba ties

UNITED NATIONS - Cuba and the United States can normalise ties only after Washington ends its trade embargo and returns the Guantanamo US naval base to Cuban control, President Raul Castro told the United Nations General Assembly on Monday. In the first speech at the UN by a Cuban president since his older brother Fidel addressed the Millennium Summit in 2000, Castro said his countrymen must be "compensated" for the decades-old US embargo if relations between the former Cold War enemies are to continue to improve. He and US President Barack Obama stunned the world last December by announcing detente after more than decades of animosity. On July 20, the United States and Cuba restored diplomatic relations after a break of 54 years. "Now, a long and complex process begins towards the normalization of relations that will only be achieved with the end of the economic, commercial and financial blockade," said Castro, 84, who had never before spoken to the General Assembly. He called for "the return to our country of the territory illegally occupied by the Guantanamo naval base." The base is on territory that has been leased by the United States from Cuba since 1903 and is used partly for a detention centre for terrorism suspects captured by the United States overseas. Castro took over as president for his ailing brother Fidel, at first provisionally in 2006 and then definitively in 2008. Raul used his speech to demand an end to unauthorised US radio and television broadcasts to Cuba "and to subversive and destabilising programs against the island." CONFIDENT EMBARGO WILL END Obama, who has used executive authority to relax parts of the embargo, said in his speech to the assembly that the United States still has differences with the Cuban government. "We will continue to stand up for human rights," he said. He said, however, that he was confident that with increased diplomatic, commercial and other contacts "our Congress will inevitably lift an embargo that should not be in place anymore." Castro said relations with Washington could only be restored "when our people are compensated for the human and economic damages they still endure." Fidel had addressed the General Assembly in 1995, but his most memorable speech was in 1960 when he said, "We shall endeavour to be brief," and then spoke for four and a half hours. Now 89 and retired, Fidel occasionally writes a newspaper column and receives dignitaries at his Havana home. Pope Francis called on the ageing revolutionary during his trip to Cuba and the United States this month. Obama is scheduled to meet with Raul Castro on Tuesday on the sidelines of the UN meeting in New York, a White House official said on Sunday. -Reuters